The spinach king of Khayelitsha 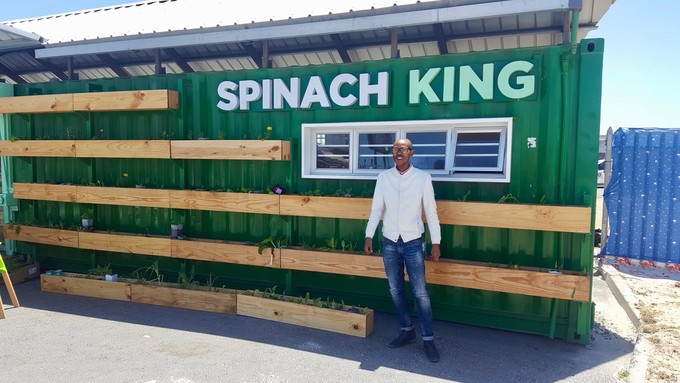 Lufefe Nomjana opened his second bakery in Khayelitsha and has plans for a global franchise. Photo: Mary-Anne Gontsana

After successfully opening his first “green” bakery in Khayelitsha in 2014, Lufefe Nomjana, popularly known as the Spinach King, opened his second bakery four months ago and plans to franchise his concept.

Situated at the busy Khayelitsha Mall, the green-painted bakery catches your eye as you walk toward the Khayelitsha station. It is made out of two large shipping containers. Spinach grows on wooden shelves along the outside wall.

“The first branch is an express bakery where we only bake and sell. At this one we bake, sell, and, as you can see, we have a cafe set up so people can sit,” says Nomjana.

There are three tables outside with space for several more.

Nomjana says it was hard getting the spaces for his businesses, first at the Violence Prevention through Urban Upgrading business hub in Harare Square and then at Khayelitsha mall, which is managed by the Khayelitsha Community Trust.

“This is the perfect spot for us. The business is good this side. We have many people coming in and out,” says Nomjana.

The new branch specialises in fresh juices and smoothies made with spinach. Muffins are R7, sandwiches and smoothies are priced at around R15; and the “Popeye Wrap” goes for R30. The most expensive dish is pasta with seaweed, baby spinach and baby tomatoes. The house speciality is a meatless green burger - a spinach bun with vegetable fry inside and drizzled with a spinach sauce.

The Richard Branson Virgin Group has been the major sponsor of the business.

Spinach King will officially be launched on 25 November. There will be samples and food to buy. People will also have an opportunity to make their own smoothies using exercise bicycles that will be stationed at the launch. Blenders are attached to the bikes and powered by pedalling.

“We are very proud of this business. It is a franchise.” Nomjana, who is 28, says he has already sold a licence to a business in Washington DC in the US and locally to someone in Kokstad.

“I knew from the beginning that I was building a global business,” says Nomjana.