“My teammates treat me with respect and dignity. I’ve never felt harassed or experienced any form of violence and abuse.” 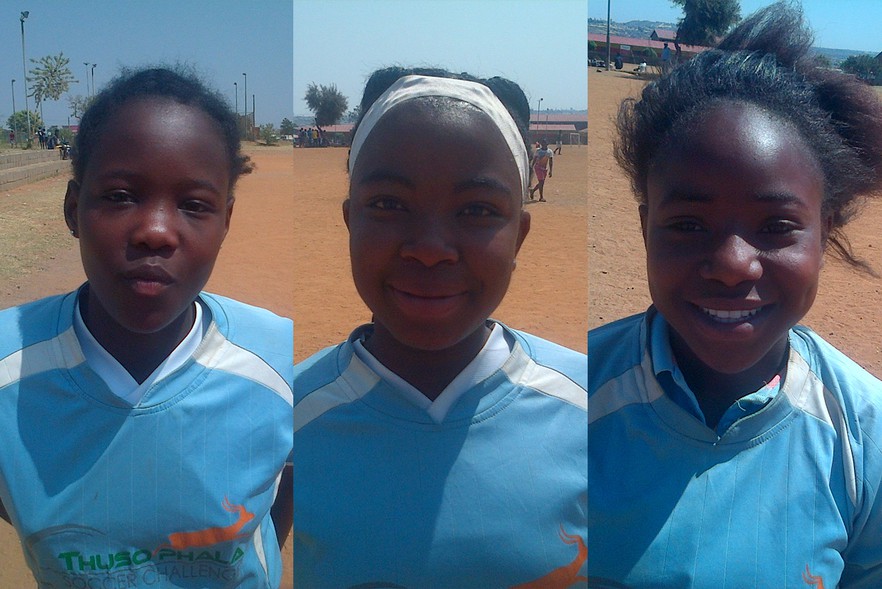 For the last three seasons 11-year-old Paballo Tshabalala has been playing soccer with the boys in Winter Roses FC, where she is regarded as one of the toughest defenders in the Orlando East Local Football Association league. She is an accomplished juggler of the ball, comfortable with both feet and her dream is to play for Sundowns Ladies and the national women’s football team Banyana Banyana.

“I joined Winter Roses because of my mega love for football, and playing with boys has helped me a lot with my basic soccer skills because they are quick and strong,” says Paballo. “Back in 2016 I was afraid of hard tackles and getting injured, but the coach told me to relax and play my normal football. Now I don’t fear my opponents and I play better as a defender.

“My teammates are like my brothers and I enjoy their company on and off the field, but there is no special treatment for me because I am a girl. I train hard to stay physically fit to retain my position in the first lineup.”

There are 16 youth soccer leagues in Soweto, some registered with SAFA and all fiercely competitive. The Orlando East league is one of them, and Orlando East Number 2 Grounds in Thibedi Street, next to Job Rathebe High School, is its home ground. What makes this previously boys-only league special is its enthusiasm to welcome girls as equals and play on the same pitch with boys.

The two soccer pitches at Number 2 Grounds host a total of 17 games on Saturday match days – the under-13s in the morning, followed by the under-11s and in the afternoon, the under-15s. Sadly, hardly any parents turn up to witness their children’s skills.

Famous pro players like Black Leopards’ Thuso Phala and former Orlando Pirates star Khethokwakhe Masuku cut their teeth as boys on Number 2 Grounds. Today, the present crop of youngsters adopt the names of their heroes, such as “Messi” (after the Barcelona phenomenon), “Gattuso” (the veteran Italian player Gennaro Gattuso) and “Shaka Zulu” (the Zulu king’s name already adopted by Cape Town City striker Siphelele Mthembu). The Orlando East youngsters are known by these nicknames on the pitch and at school.

The league’s gender-busting latest arrivals say they are inspired by Amanda Mthandi, the Banyana Banyana striker who was the first girl to play in the boys league (for Via Orlando FC) way back in 2007. Initially, fans didn’t realise she was a girl. Mthandi, 23, is now in her final year at the University of Johannesburg, where she plays for its women’s team in the Gauteng Sasol league.

Twelve-year-old Lindiwe Mazibuko is a midfielder and captain of Orlando Real Stars under-13s. “I prefer playing in the boys’ team because there is no gossiping and jealousy,” says Lindiwe. “My former coach made me a captain of the girls’ team, and I did not enjoy it due to lack of respect from girls. But the boys don’t have a problem having me as their captain. They appreciate and respect me.”

Lindiwe’s coach at Orlando Real Stars is Mapetla Matemele, a box-to-box diehard who attacks and defends with his team, racing up and down the touchline. His bellow alone can change the tempo of a game when the chips are down.

“Boys seem to be at their best behavior when they’re mingled with girls and in terms of discipline I have never heard any complaints,” says Matemele. “I like the fact that our league doesn’t have a problem with girls playing in the same team with boys. I am glad that the league which was meant only for boys has given girls a chance to play without abuse or discrimination.”

Another of coach Matemele’s girl players at Orlando Real Stars is 15-year-old striker Thando Williams. “The tempo of the game is high, but I’ve never worried about my gender since I work as hard as other players in the game,” says Thando.

A third Orlando Real Stars girl, midfielder Nomafuza Bulane, 15, declares: “I really hate the sound of gender-based violence. We are supposed to treat each other equally, and there shouldn’t be any difference between female and male. If a female player is competent enough to play with Bafana Bafana in the national (men’s) team, she should be given a chance to represent South Africa.

“My teammates treat me with respect and dignity. I’ve never felt harassed or experienced any form of violence and abuse.”

Co-founder of Orlando Real Stars Nicholas Mnisi, who coaches the under-13s, believes that girls have what it takes to compete in the Premier Soccer League, if given the chance. “I have a 12-year-old quality player, Siyanda Maphanga, and a lot of boys know that Siyanda is a hard nut to crack in the middle of the park with her good basic soccer skills,” says Mnisi.

“Physically Siyanda goes pound to pound with boys and comes out tops in most battles. Her tactical awareness of the game is on another level. Siyanda is a complete footballer.”

Chairman of the Orlando East Local Football Association league and coach of Winter Roses FC (established 1989) is Zandisile “Shoes” Khoba. “They’re all the same to me, boy or girl,” says Shoes, who’s softly-spoken with a Colgate smile and a small gap in his teeth that comes in useful for whistling when he’s coaching his team.

Shoes continues: “Our league executive didn’t have any disputes when girls started joining our teams and playing with boys. Instead, these girls changed the way we used to see footer as a man’s game, like in the 80s. Now our league has many girls in the teams. They are very competitive which makes it hard for you to notice the difference.”

Nine-year-old Amahle Ndaba recently made history at Juniors United FC, the first girl to join Juniors’ ranks since the club was established in 2015. “Before I joined Juniors United I already knew its players like Mdu ‘Messi’ Miya, and Njabulo ‘Gattuso’ Dlamini,” says Amahle. “We live on the same street and play street soccer together after school. I love football and one day want to be on TV playing for Banyana Banyana.”

After a two-hour training session, the members of Juniors United sat down under a tree for a talk on how its first girl member should be treated. “We decided that Amahle is like a sister to us and no one is allowed to flirt, touch or charm her in any way,” says one of them. During the indaba “Messi” Miya accused a new team member of planning to date her. The would-be Romeo apologised, promised not to make any moves, but to protect her “like a sister”.

Damane, a freelance reporter, is coach for Juniors United FC.