They perform a play about growing up on township streets 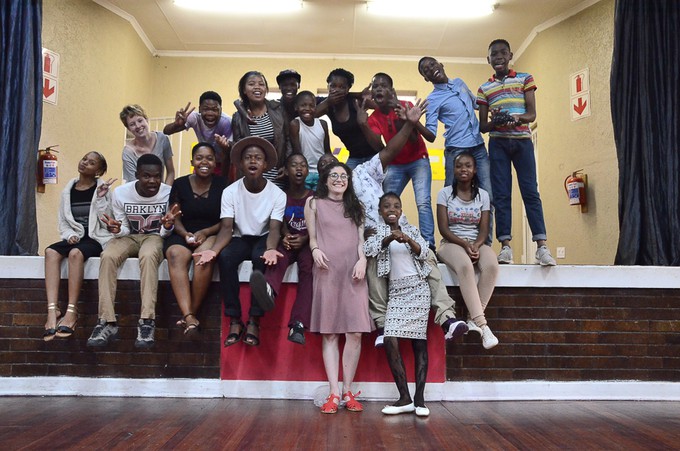 Every week, fifteen youths make their way to the community hall in Noordgesig, a township situated among the mine dumps on the northern boundary of Soweto. The students are here to practice acting, dancing and singing, and to rehearse for their first show.

The Ngizwe (meaning ‘hear me’) theatre group was formed in January 2016 by Tshabalira Lebakeng, 37, whose passion for drama took him from homelessness to directing, writing and acting.

“When I was pushed on to the streets, I used to survive with the [other homeless] boys. We never used glue, but when we drank Smirnoff vodka, we would sing and act and do imitations of different famous people,” he remembers with a smile.

Ngizwe’s debut performance is based on an event that has haunted Lebakeng. The production is titled The Little One.

“This story is about my life on the streets and our friend, the little one, who we found poisoned. I grew up thinking about him. No one came looking for him, so we had to bury him by the train station.” This was in Kwa-Zulu-Natal.

It will be the first time Lebakeng confronts this traumatic event.

The youths, who range in age from ten to 20, with a cocktail of acting experience between them, use black bags, egg cartons and polystyrene cups as props.

The oldest and most experienced is 20-year-old Lihle Hadebe. She has known Lebakeng since 2013, when he approached her school as a drama teacher and held auditions. Hadebe went on to do various community performances, adverts and short films.

“Tshaba [Lebakeng] gave me a pencil and told me I need to become a writer. I even used that pencil in my final year exams, because I didn’t have one of my own,” she says. After school, she joined an acting agency, and wrote and directed a play.

Despite her obvious talent on the stage, Hadebe says her family is encouraging her to pursue a career in medicine, teaching or engineering. But, she says, “When I am on the stage it is like I have a break from my life. I can be anyone. That is why Ngizwe is my home.”

The youngest of the group, ten-year-old Nobuhle Mbanjwa, who is in the title role, says, “When I act I feel I am a person I have never been in my life.”

“Acting is my dream and my talent, and because of this, my mother supports me, even though no one was there to support her.”

Emma Delius, Creative Director of Ngizwe, recently completed her Masters degree at the Royal Academy of Dramatic Arts and Birkbeck University in London. Delius wanted to apply her thesis, which looked at theatre for education and development, at a grassroots level.

“I am involved in Ngizwe because of these incredible children. Every day I arrive and they have something new to teach me about the world, and there is nothing more inspiring than that,” she says.

Delius heard about Lebakeng through The Homeless Story Project run by directors Harriet Perlman and Robbie Thorpe who workshopped with a group of homeless individuals to script a film about their lives, resulting in the recently screened film Vaya at the Toronto International Film Festival.

“I was inspired by Tshaba [Lebakeng’s] own personal story,” says Delius, “but also by the kind of work he was doing with the kids.”

Delius’s Facebook and Thundafund (a South African Kickstarter equivalent) campaign raised R16,010 for food, transport and outings for the children.

They hope to raise enough funds to tour the work to the National Arts Festival.

On the day of Ngizwe’s opening show, there is heavy rain and some hail stones. The community hall fills up slowly, awaiting the parents who have been trapped indoors, unable to walk through the storm to see their children perform. The students wait anxiously backstage. For most of them, this is their first performance.

Lebakeng, in a white shirt and bow-tie, begins to tell the story of growing up and surviving on the streets. When the story reaches its climax, the death of the little one, Lebakeng pauses, and says, “I carried my friend’s grave in my hands ever since.” It brings tears to the audience.

“That is why I started Ngizwe, so that no child will ever feel this pain. No child will be robbed of being a child again.”