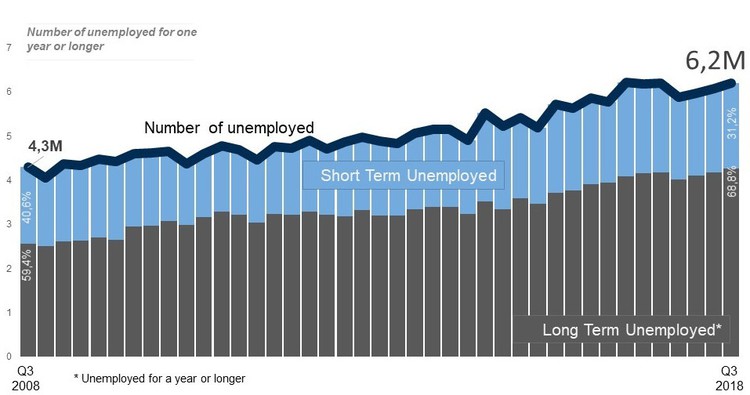 The latest Quarterly Labour Force Survey (QLFS) released by Statistics South Africa on Tuesday says the unemployment rate for the fourth quarter of 2018 was 27.1%. This is up from 26.7% at the same time in 2017.

Over a quarter of the able working population in South Africa does not work, making this a country with one of the highest unemployment rates in the world.

This means that 6.1 million of the 22.6 million labour force is unemployed. Compared to the same time a year ago, an additional 400,000 eligible workers are unemployed. (The eligible worker population has increased by about 600,000.)

Also of concern is that 38.9% of youth aged 15-34 are unemployed while not being in education or training for employment. This is up from 38.4%.

One in three economically active South Africans between the ages of 25 and 34 — a key cross section of the labour force — is unemployed. By race, the unemployment rate is highest among black people (30.4%) and lowest among white people (7.6%).

The number of people seeking work for a year or longer (long-term unemployed) has been consistently high over the past decade. Over two-thirds (4.4 million) of unemployed people had been unemployed “long-term” in the fourth quarter of 2018.

High unemployment also has an effect on growth. In its January 2019 Global Economic Prospects report, the World Bank revised its forecast for growth in South Africa’s Gross Domestic Product (GDP) down to 1.3%, stating: “High unemployment and slow growth in household credit extension are expected to constrain domestic demand in 2019.”

COSATU announced last week that it will be having a national strike on 13 February to protest job losses.