South Africans come out in support of #ClimateStrike 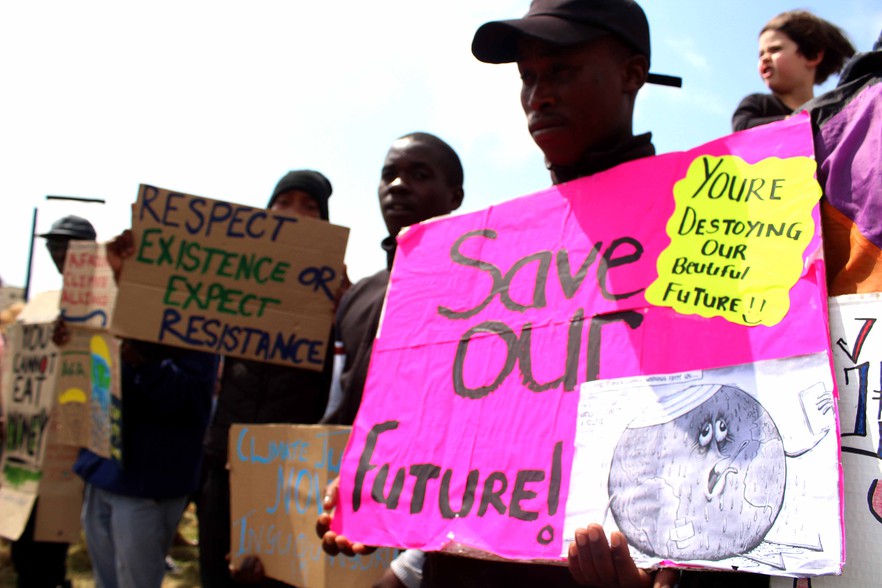 In cities across South Africa people protested on Friday to raise awareness of climate change. The Global Climate Strike, or #ClimateStrike, runs from 20 to 27 September. The global protests come ahead of the United Nations Climate Action Summit, taking place in New York.

According to a website set up to popularise the protests:

“This week will be historic. In over 150 countries, people are stepping up to support young climate strikers and demand an end to the age of fossil fuels. The climate crisis won’t wait, so neither will we.”

18-year-old Ruby Sampson, the founder and leader of the Youth and Pan African wing of the ACA, said that she is disappointed that President Cyril Ramaphosa was not attending the UN Summit. “We want Ramaphosa to declare a climate emergency,” she said.

An energetic crowd of children, some wearing their school uniforms, marched from Keizersgracht (Hanover) street in the city centre to the gates of Parliament, where there was a programme of speeches, performances and the handover of a memorandum.

Phindile Maxiti, the City of Cape Town Mayco Member for Energy and Climate change, who addressed the crowd, said that the City supported the strike and was “at the forefront of sustainability”.

“As a local council, we will submit your memorandum to the president,” said Maxiti who also described Cape Town as a water-wise city, following the city’s drought.

17-year-old Ayakha Melithafa, also with ACA, said that climate change is not just a “white” issue. “I see how much it affects people of colour,” said Melithafa. “Our people don’t know how to vocalise their issues when it comes to climate change. I’m hoping to be a voice for the voiceless.”

People attended from across the city, including Mfuleni, Khayelitsha, Delft and the southern suburbs. Some held placards which read, “Climate change education in classrooms” and “Go green to breathe clean”. 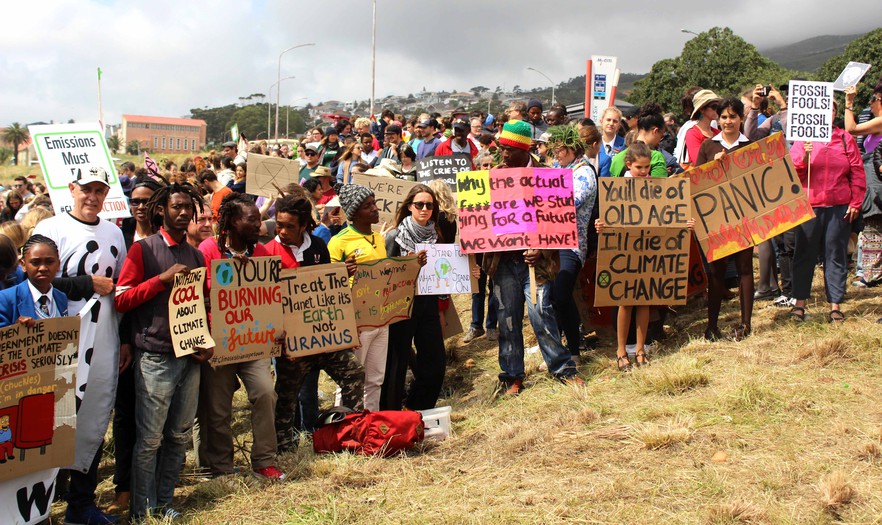 There was a colourful array of people and banners in Cape Town. Photo: Masixole Feni

“Act now or there will be hell and high water.” This was written on one of the many placards at the climate march in central Johannesburg where hundreds of people, led by youth, marched from Pieter Roos Park to the Gauteng Legislature office on Friday morning.

The protesters demanded that government declare a climate emergency and ensure a just transition from fossil fuels to renewable energy that protects workers and communities. They also demanded that President Cyril Ramaphosa attend the Global Climate Action Summit in New York and commit to decreasing emissions and transitioning away from coal at the summit.

The march was organised and supported by various civil society organisations, community groups and trade unions.

15-year-old Sera Farista said government does not see the youth as a threat or as powerful and “that’s unfortunate because we are the future of this world”. She said the floods in Mozambique, drought in Cape Town and other natural disasters around the world were linked to climate change.

“Our planet is dying and our future is fading with it,” said Farista. Society is facing racism, inequality, poverty and global warming and there is a lack of food and water security, yet people ignore those issues because it is too political, she said. “Taking that stance is exercising your privilege because those issues don’t affect you.”

Tebogo Mokgope from Extinction Rebellion said: “It is us, the poor, who will be the first ones to suffer [in the climate crisis].” He said that once politicians were elected into power, they listened to ‘corporate greed’ instead of the needs of people who put them in power.

He urged the government to put the needs of people before profits.

Priscilla Masepe, a member of the Gauteng legislature, collected and signed the memorandum. She said she would send the memorandum to President Ramaphosa’s office so that he could discuss the issues with his counterparts at the Global Climate Action Summit.

She said she would try to get a response to the memorandum after the summit. 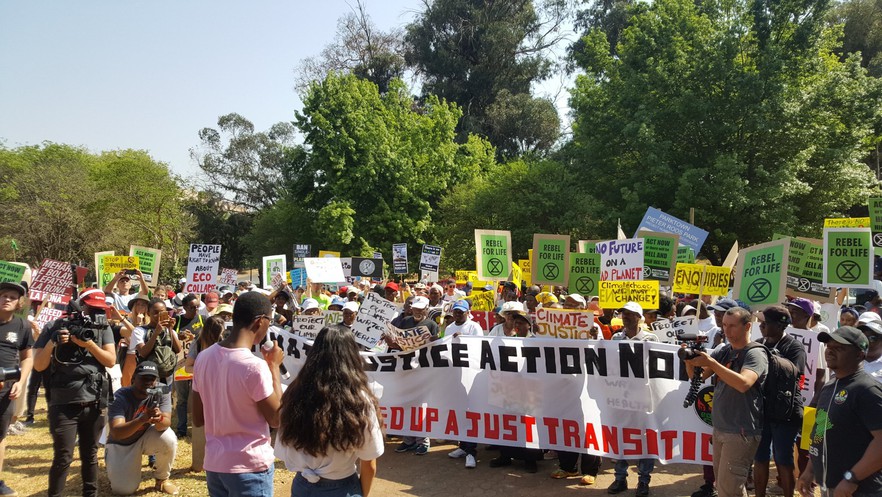 Extinction Rebellion is a worldwide movement that has also taken off in South Africa, as can be seen by the green signs held by Johannesburg protesters. Photo: Alex Lenferna

Dozens of people gathered outside Port Elizabeth City Hall. They called for government to take decisive action against the accumulation of profits by businesses that pollute the environment.

They sang, carried placards, and sat on Vuyisile Mini Square.

Protest leader Melikhaya Blani said: “It is of paramount importance that we should gather here to convey a message that industries that are around here stick to emission standards.”

“Every day we witness huge emissions of black smoke from the factories within our city. This is the same air that we breathe, that plants need to use to grow,” said Mzikazi Nkata, secretary of the South African Federation of Trade Unions in Nelson Mandela Bay.

“We are in danger due to climate change. It puts huge pressure on our communities by making it more difficult to grow food, to obtain clean water, to keep livestock,” she added.

Another activist, Nicole Collier-Naidoo, said she was representing a small group called Climate Awareness PE. ”The climate crisis is a huge threat to our people, yet we are not seeing it discussed as a crisis in the media.”

“We want our government to treat this as the emergency that it is, and inform its citizens about how we are going to adapt to climate change,” she said.

She said that human civilisation had released a huge amount of carbon dioxide. This trapped heat within our atmosphere and had caused rapid heating of our world. Insect and animal species were going extinct at an alarming rate.

“If we continue at this rate, we humans will eventually go extinct too. We are part of nature and we depend on the work that all these ecosystems do for us. When they are destroyed, our species will eventually follow,” she said. 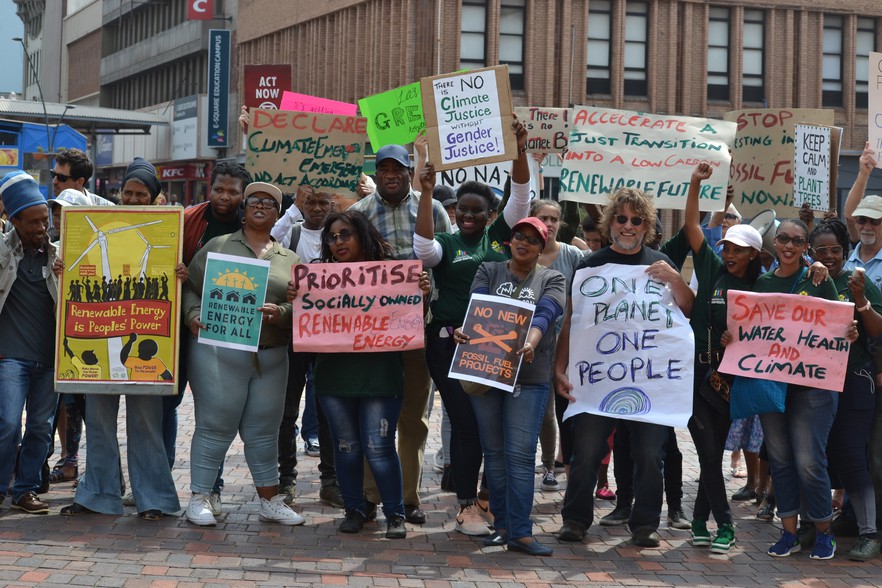