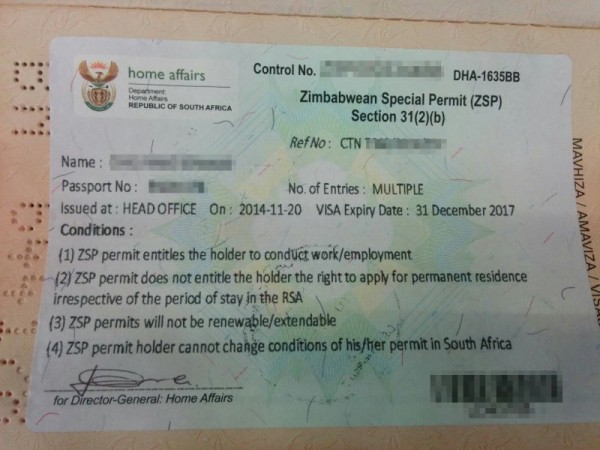 Zimbabweans waiting for their new permits should bring proof of application to their bank to avoid the blocking of their account, say the banks.

Some Zimbabweans who are waiting for their new Zimbabwean Exemption Permit (ZEP) have found their South African bank accounts blocked.

The former Zimbabwe Special Permits (ZSP) expired on 31 December last year and holders were allowed to apply for the new ZEP from January 2018.

In a statement on 11 December 2017 the Department of Home Affairs advised South African banks, learning institutions and employers to continue with services to ZSP holders until they received their new ZEP, provided they produced proof that they had applied for the new permit.

ABSA and FNB confirmed they were aware of this.

But some ZSP holders said they had not been warned that they must bring proof of their ZEP application and had found their bank accounts closed without notice.

Two customers said their ABSA bank accounts had been closed twice this year, in January and May 2018.

“It is really bad. I have been saving money through my ABSA account intending to send my child for driving lessons on earth-moving vehicles in Zimbabwe but I could not access the money the time I needed it,” said Tsitsi Mhare.

“A manager from Pick n Pay advised me to visit my bank. He told me that he had referred several Zimbabweans using ABSA bank to their branches for advice,” said Mhare.

Mhare works as a domestic worker and also sells vegetables when she is off duty.

“I pay R1,500 rent for my room per month. The first time I had to struggle to convince the landlord that my account was blocked. She gave me three days to pay the rent. I had to borrow the money from friends.”

She was told by the bank to bring a relative with a bank account at ABSA, with his or her ID or passport and bank statement, in order to get her own account unblocked.

But five months later the account was blocked again.

Eddie Steyn, Head of Retail and Business Bank Distribution Operations at ABSA, said customers should bring proof they had applied for the ZEP, “so as to ensure an uninterrupted banking relationship”.

FNB spokesperson Lee-Anne Zyl also said the bank would continue to offer services as long as ZSP holders provided proof they had applied for the ZEP.