Vuyisa Sityebi lost a kidney and part of his intestine 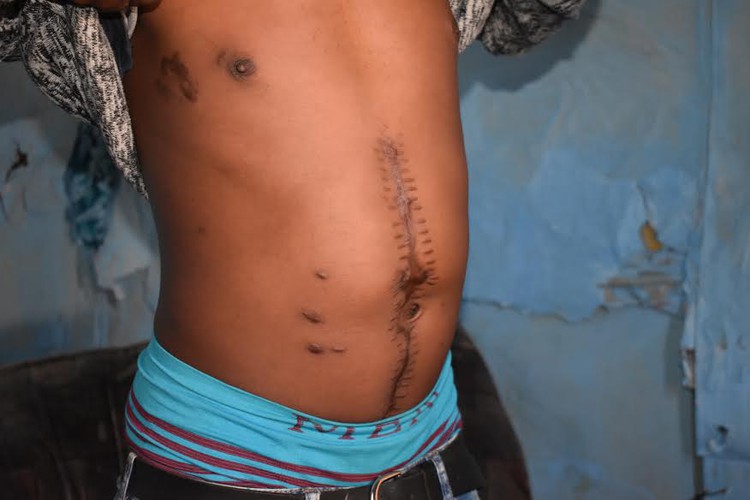 Vuyisa Sityebi, 33, says he was sitting on the couch in his Crossroads shack on 19 February when soldiers who were chasing a robber fired a shot through the shack wall. SANDF soldiers had been called into the Cape Flats some months earlier to help curb gang violence.

“It was around 10:30 am when I heard gunshots. They were far. But suddenly I heard the shots being fired close to my shack,” said Sityebi. He said he was having something to eat, sitting on his couch when he was hit in the back.

“The bullet came through the back of my shack. I didn’t know I was shot until I saw the blood on my plate. I ran outside for help,” he says. He was rushed to Mitchell’s Plain hospital where he was referred to Groote Schuur for surgery.

He says the soldiers who accidentally shot him were chasing a robber at Philippi Plaza who had run into the area. “I saw the soldiers, I told them that they shot me instead of the robber. After saying that, I fainted.”

He says he regained consciousness in hospital after four days.

Sityebi’s Groote Schuur documents show that he spent four days in intensive care with a gunshot wound to the chest and abdomen, He suffered excessive bleeding, and a kidney and part of his intestine had to be removed. He was in hospital for nearly a month.

He can no longer do the building or gardening work he used to do, and he cannot walk far. He has no income and is dependent on help from his family. He laid a complaint with the police on his discharge from hospital, but has heard nothing since.

“The bullet changed my life. I may never be able to work again,” he says.

SAPS spokesperson Sergeant Noloyiso Rwexana confirmed that Sityebi had laid a complaint with the police and that the matter was under investigation. She said the detectives were awaiting ballistic reports. We asked why the investigation was taking so long but Rwexana had not replied to this and other questions at the time of publication.

We sent a request for information to SANDF communication officer Captain Walter Kassaka but he declined to answer, saying the matter was under investigation by SAPS.