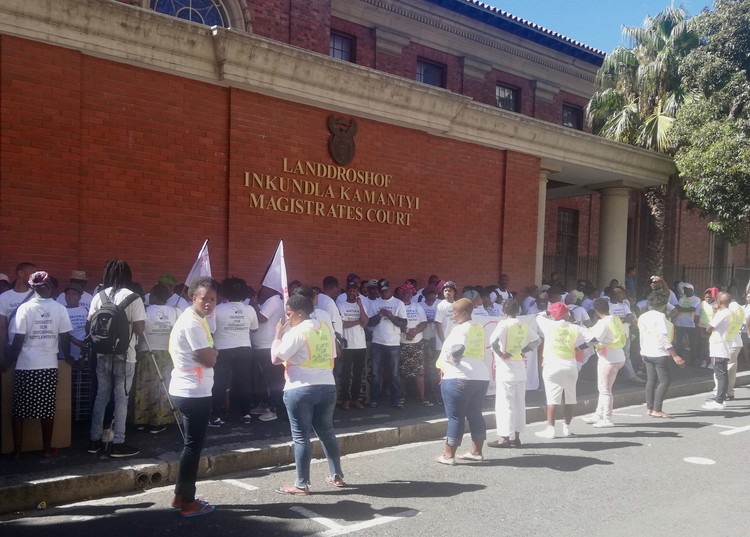 The case against Social Justice Coalition (SJC) general secretary Axolile Notywala was postponed to 25 March in the Cape Town Magistrates’ Court on Wednesday.

Notywala was arrested on 31 January outside the Cape Town Civic Centre where SJC and a number of residents, who had occupied City-owned land, were protesting, demanding water, electricity and sanitation. Police had fired stun grenades to push back protesters who blocked entry to the Civic Centre. Notywala then shouted at the police, demanding to know why they had used force. He was arrested and charged with contravening the Regulation of Gatherings Act. He was released later that afternoon.

“What police did is uncalled for; its unacceptable, and it’s what they continue to do when poor black people are protesting … It was a clearly peaceful protest, where people were just waiting for the mayor to come and address them,” said Notywala.

Activists from different organisation, such as Equal Education, #UniteBehind and Ndifuna Ukwazi, came to support Notywala on his first appearance. But his name was not on the court roll and his docket could not be found. After several discussions between his lawyer and the state prosecutor, his supporters were told that Notywala should have appeared in court on Friday and that a warrant of arrest was out for him.

Notywala had in his possession his charge sheet, which stated that he must appear in court on Wednesday. The warrant of arrest was then revoked and the case postponed to March.

Notywala proceeded to the Cape Town Central police station to open a case against the police (SAPS) of assault and contravening the Prevention of Combating and Torture of Persons Act.

He said he was made to kneel on the floor of the police van and slapped by police officers five times. He was handcuffed for two hours without being charged.

He said he would also complain to the Independent Police Investigative Directorate and the Human Rights Commission.