They allege that they have been underpaid 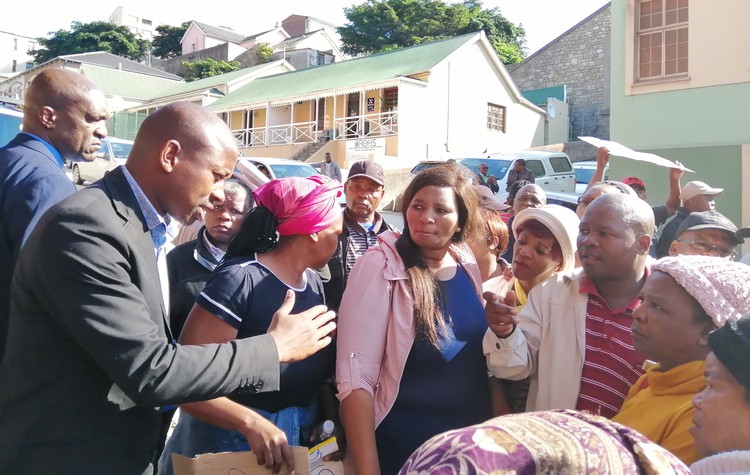 About 50 builders of RDP houses protested outside the Nelson Mandela Bay Metropolitan Municipality council chambers on Thursday afternoon. They demanded a report on the value of all RDP houses built since 2004.

The council was in session at the time.

Protest leader Sipho Gcora said that they represented about 109 small companies who have been exploited by the municipality. “We discovered that in 2016 we were all underpaid. In fact, RDP house builders who bribed greedy officials got the exact value of the unit and we got less,” he said.

Some protesters shouted: “Our money is in your banks”, while others shouted: “You thieves, you robbers, you will go to hell.”

“We are hungry with our children because of you!” shouted one protester.

Gcora said that they wanted a report on the value of each RDP house but the City has not provided it. “We built over 50,000 RDP houses in Port Elizabeth alone,” he said. “From 2004 these projects were affected by fraud.”

“The Nelson Mandela Bay municipality owes us R40 million. The perpetrators are municipal officials who have been working here since 1996.”

“Imagine two years later, you’ve got a shortfall of R12,000 on a house. How are you going to grow as a [small business]?” Gcora asked.

Mayco Member for Infrastructure and Engineering Andile Lungisa came out of the council chambers. He was advised by security to use an escape door but Lungisa chose to use the main door and was accompanied by his bodyguards as he addressed the protesters.

“I am here to listen to your grievances,” he said. “As politicians, we cannot address this matter because you say the report is with officials. Inside the council there are no officials but only politicians.”

He offered to arrange a meeting with the housing Mayco Member and officials on Friday. “Nothing is impossible,” he said. “We will see how to make sure you get the letter or report you want.”