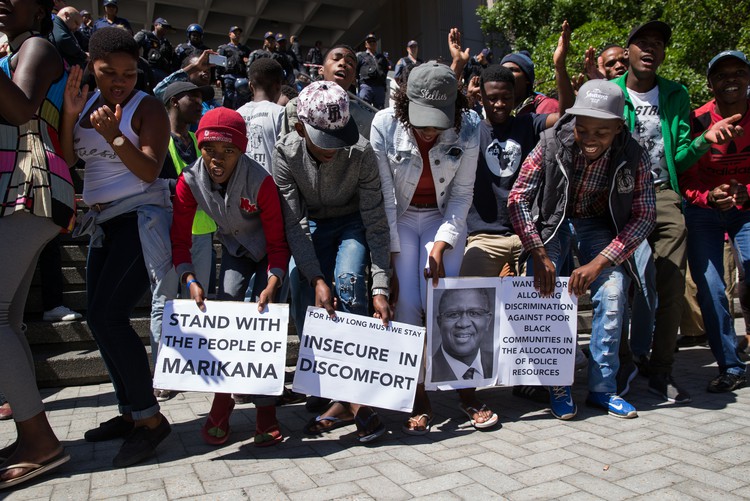 Members of the Marikana community protest outside the Civic Centre in Cape Town. Photo: Ashraf Hendricks

Hundreds of people from the Marikana informal settlement in Philippi East marched on Thursday to the Cape Town Civic Centre and the provincial head office of the South African Police Service (SAPS) to hand over a memorandum.

Spearheaded by the Social Justice Coalition (SJC) the memorandum calls for improved safety in the area. This comes after 11 people were murdered in the informal settlement last weekend. Demands include public lighting, the expropriation of the land, increased police resources and a strategy to address vigilantism.

A major issue in Marikana is a lack of street lighting. Dalli Weyers, the acting head for safety and justice at the SJC said, “Marikana is serviced by a single high mast light that residents in that community say works intermittently. A lack of lighting obviously creates cover for criminality in the community.”

At a previous meeting held at the Philippi police station, Loyiso Nkohla, executive support officer for the City said: “The City of Cape Town can’t electrify a place that doesn’t belong to it.”

When the memorandum was handed over, protesters became annoyed as none of the expected senior government officials arrived to hear their grievances.

Residents then marched to the SAPS provincial head office where another memorandum was handed over.

“We are here to say enough is enough. We cannot have black bodies dropping like flies everyday … and have the police and IPID [Independent Police Investigative Directorate] continuing like it’s business as usual,” said Mandisa Dyantyi, Deputy General Secretary of the SJC.

“If these attacks were taking place in Constantia or Bishopscourt or any of the well-to-do areas, something would have been done a long time ago,” she said.

Deputy Provincial Commissioner Major-General Manci Mpumelelo accepted the memorandum. “Even now as we speak, there are deployments in the area. Even now, I’m coming from a briefing of 207 [SAPS] members whom we are deploying there to ensure that there’s law and order in that place,” he said. Mpumelelo said that two arrests have been made in connection with the murders.

But Marikana resident Siphiwo Tofile said it is all talk. “We want action. We don’t want verbal promises,” he said. Tofile says that the police mostly drive around during the day. “At night, they don’t patrol,” he said.