Sixty learners to a classroom in Driftsands

Parents shut down Cape Town school because of overcrowding 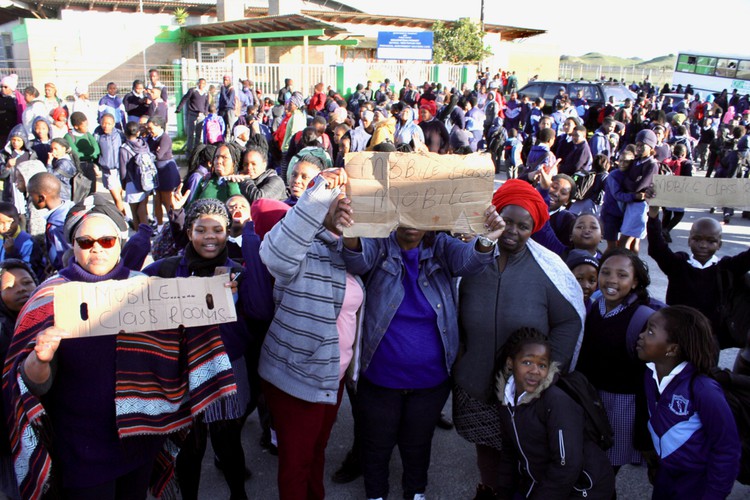 Parents shut down Mzamomtsha Primary School in Driftsands on Tuesday because of overcrowding at the school. There are over 60 learners to a class in grades 8 and 9. Teaching resumed on Wednesdsay.

“We are too close to each other and share a chair. Some children sit down on the floor and we cannot focus on what is being taught by the teacher,” a Grade 8 learner told GroundUp.

Lumkile Ngcongo, secretary for Driftsands Development Forum, said the forum wanted the Western Cape Education Department (WCED) “to come here and tell us when we are receiving mobile classrooms or learning will not continue.”

School governing board member Bolekwa Madikane said they had been promised that by May mobile classrooms would be delivered. “But June came, and nothing was delivered. The school does not have a staff room, and a storage room with no windows is used as a class,” he said.

Education MEC spokesperson Jessica Shelver said, “The District has applied for additional mobile classrooms to accommodate the growth. The circuit manager met with the protestors on Tuesday. The protestors have given the WCED 14 days to respond and have indicated that schooling will return to normal on Wednesday.”

“We have projected that the system will grow by more than 26,000 learners in 2019 … Besides these pressures, the nationally negotiated wage increase has had a devastating impact on our budget. Provinces were left to cover these increases without any additional funding from the national government, despite them recklessly agreeing to these increases.”

As a result, she said, there was insufficient funding to provide desperately needed additional educators and classrooms.