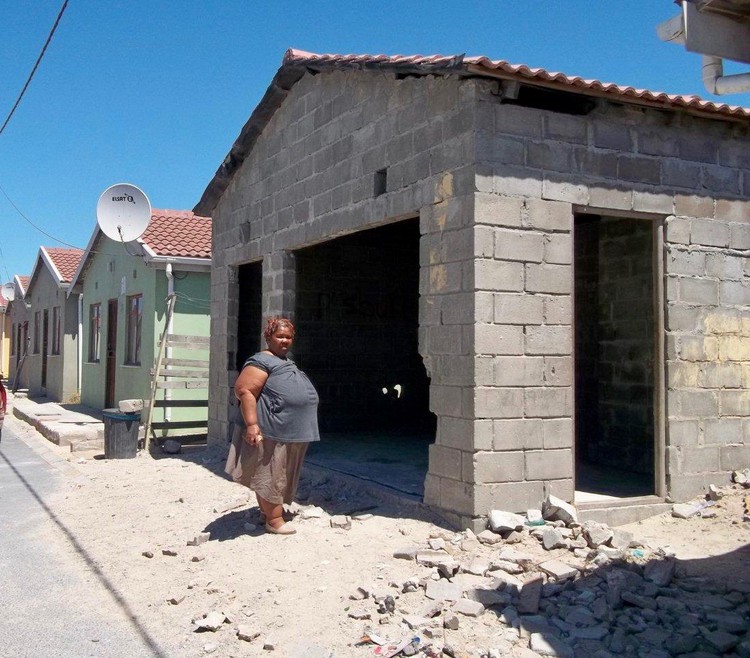 Thembeka Mpete has been waiting since 2013 for government to complete her house in Section SST, Khayelitsha. In the meantime, she has been living in a shack.

Mpete, who is 57, dismantled her original shack in March 2013 to make way for the RDP house. She moved to Blowy informal settlement nearby in the meantime. But her house has never been completed.

A fire in Blowy in October 2018 has left her with a shack made of salvaged, burnt zinc sheets riddled with holes. “In winter the shack becomes ice-cold and flooded,” she says.

A proper house would make a big difference to her life as Mpete struggles to walk and she has diabetes, asthma, high blood pressure and arthritis.

“When I walk to the public toilets, I carry a chair and rest three times … because my legs ache,” she says.

She lives on a disability grant and tries to make extra cash selling umqombothi (home-brewed beer). Her children are unemployed.

“I have to set money aside to hire a charwoman to wash my clothes because arthritis prevents me from washing them myself,” she says.

Mpete supports her granddaughter in Grade 3 at Chumisa Primary School in Site B, Khayelitsha.

She says that after she complained in 2015 about her unfinished house, the City of Cape Town arranged for a builder to roof it. The house is in a terrible condition. It is without windows or doors. The rooms are filled with rubbish.

“Criminals have now turned my house into their home where they sleep and smoke tik,” she says. “I have been waiting for the house for almost six years and no one stands up for me.”

Andisiwe Shugu, who lives next door to Mpete’s unfinished house, said, “Wearing their full uniforms, school boys bunk classes and hang out in the house, buying alcohol and drinking it. Dagga smoke permeates my house when they smoke it … My neighbour says the boys keep her awake at night as they make a noise having drunken sex with girls.”

“We want the City of Cape Town to finish building the house or demolish it altogether because thugs use it as their hideout,” said Shugu.

Nomaxabiso Sishuba, a member of SST Neighbourhood Watch, said, “The boys cause trouble in our area as they fight among themselves and hit each other with stones.”