A month ago the Cape Town mayor promised the toilets in Site B would be fixed up. This week he promised again. 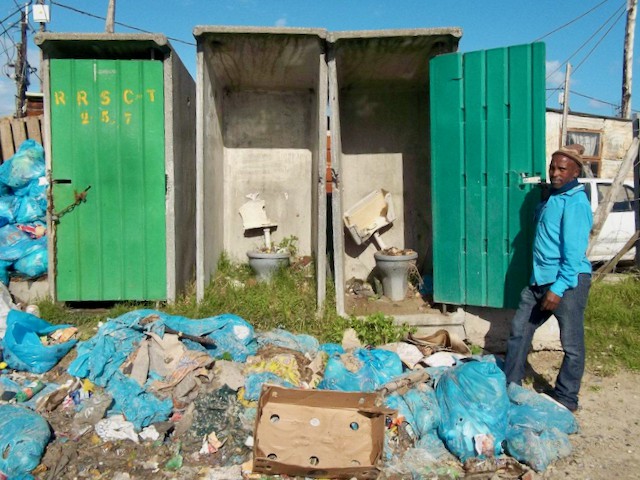 Ayanda Mangxaba shows some of the toilets choked with filth in Site B, Khayelitsha. Photo: Vincent Lali

Toilets are choked with filth in Site B, Khayelitsha, despite the City of Cape Town’s pledge to clean them up. Toilets in RR section are overflowing with faeces, and many have no doors, seats or cisterns. Residents say some blocks of toilets haven’t been cleaned in a year, and some not for almost two years.

According to community leader Eddie Nogwaxa, Mayor Dan Plato promised to get companies to clean and repair the dirty and damaged toilets when he conducted an impromptu walkabout in RR section on 8 June. But there has been no sign of the City since.

“Dan Plato came to hand over a soup kitchen, but I and other community leaders asked him to look at our toilets and help us,” said Nogwaxa. “After we showed him all the dirty and damaged toilets, he promised to send a cleaning company to remove all the dirt in our toilets within two weeks.”

Nogwaxa said that Mayor Plato also promised to send another company to fix damaged doors and reinstall missing cisterns, toilet bowls and doors. “We are worried that when his term ends after the local government elections, we will have to inform a new mayor about the toilets and he or she will also need time to repair them.”

“I and the residents are disappointed that he has not kept his word because we were hopeful that he would help us after he witnessed the shockingly unhygienic condition of our toilets.”

Responding to questions from GroundUp, Mayor Dan Plato said, “The information was previously shared with the service provider following the visit to RR-section. We will follow-up to ensure it is attended to.”

Community leader Zoliswa Mdletye said she relieves herself in a grubby and blocked toilet nearby.

“I clean the dirty toilet bowl … and every time I do so I remember that I’m a worthless, poor shack dweller,” she said.

She and 12 families with whom she shares a toilet are struggling to find a hygienic place to relieve themselves.

Local resident Ayanda Mangxaba said only one of the three toilets beside his shack were usable while others have been dirty and damaged for almost two years. A fourth toilet fell to the ground because City plumbers never put it up properly, he said.

Mangxaba said; “Since the toilets arrived, they never flushed as the pipes sending water to the cisterns were damaged. Janitors don’t clean them.”

Siphokazi Mzileni said toilets located near her shack don’t flush either. “You have to bring along a bucket and collect water from a nearby tap to flush before you relieve yourself. Sometimes the tap doesn’t produce water and you can’t flush your faeces down the toilet,” she said.

Bongeka Fotoyi, who started to work as a janitor in the area on 2 June, said she and other janitors don’t clean the blocked and damaged toilets.

“The toilets are extremely dirty. We can’t deal with faeces without being inoculated first,” she said.

Mdletye said, “The janitors fear for their health, but they work because they are desperate to get money to support their families.”

Response from the City

Mayco Member for Water and Waste Alderman Xanthea Limberg said on the weekend of 17 and 18 July the City’s Informal Settlement Basic Services Branch attended to the toilets with the broken cisterns.

“The missing and/or damaged doors will be replaced as soon as the ordered stock has been received. There is currently a shortage of parts and equipment such as doors. Since the start of the Covid-19 pandemic, there have been delays in the shipment of equipment and building material and Cape Town is no exception,” said Limberg.

“The City has been cleaning toilets in RR for the past two years. The City provides a top-up janitorial service and increased services have been provided since the beginning of lockdown as part of the City’s Informal Settlements Covid-19 temporary emergency services programme.

“Recently, janitors have objected to cleaning the toilets on the grounds of not having received inoculation. Inoculation is scheduled for August.

“Wherever possible the City will attempt to inoculate workers before taking up their duties, however high numbers being recruited and limited capacity for inoculation can make this challenging at times.”

Limberg said, “Janitors will be engaged and advised that they are still required to clean toilets while waiting for inoculation to take place. Supervisors of RR Section have been advised to inform janitors of the planned inoculation dates and that they should continue attending to the cleaning of the toilets.