“Sisi, what’s the use of voting?” asks Pietermaritzburg resident

Impassable roads, no tap water, no clinic, no community hall and their municipality placed under administration for irregular expenditure 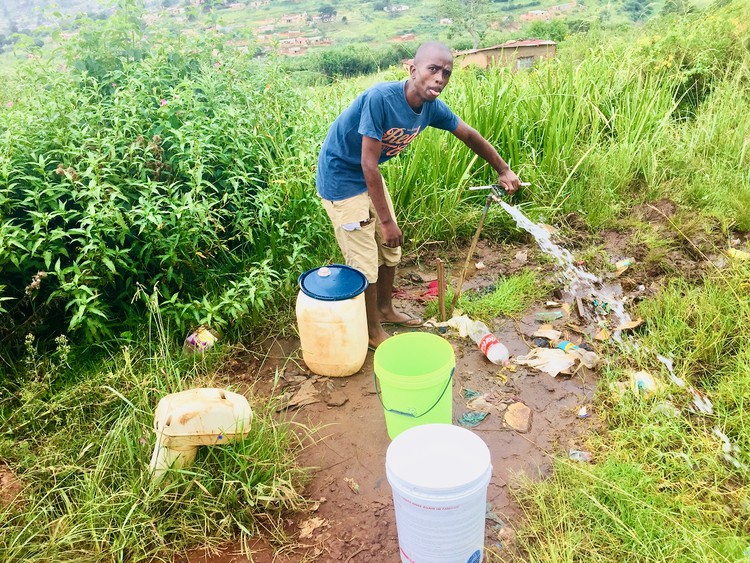 Residents in Bhobhonono, Pietermaritzburg, say their community is greatly neglected by government and things have not improved even though the Msunduzi municipality was placed under administration last year. Former Co-operative and Traditional Affairs (COGTA) MEC Nomusa Dube-Ncube took the decision because of maladministration and irregular expenditure.

There are about 200 households. Many people still live in mud houses. Residents, who have been living here since the early 1980s, say the area was electrified in 1995 and received piped water in 1999. But there has been precious little development in the last 20 years and the taps ran dry many years ago.

The roads are potholed. The nearest clinic is in Esigodini, a four kilometre walk away. The nearest schools are in Edendale. There is no community hall.

“Electricity is the only thing we can point to as a benefit of democracy; the taps are not functional,” said Zinhle Ngcobo, who has been living in Bhobhonono since 1990.

“People are living in falling down houses,” she said. “The communal tap is opened using pliers. One has to carry a tool to be able to get water. The tap has been leaking for years and that is being ignored. We love the political parties we vote for but this time we are not sure. We will have to think twice about voting.”

“Sisi, what’s the use of voting?” asked resident Jonathan Feta, born and bred in Bhobhonono. “In this day and age here is a place that doesn’t have access to a basic need such as water. There’s no community hall, not even a mobile clinic. Children from Bhobhonono have to travel to Esigodini and Edendale for learning. There is nothing that we can say is ours.”

He said some of the roads are impassable for cars. “We have not even seen a tractor fixing the road or opening passages for people and drivers. After they get our votes, they run away from us.”

Those further away from the communal tap depend on a water tanker, but it can’t get through when the roads are slippery. “Sometimes we survive by water from the rain. We fill up containers during the rain,” said resident Samkelo Dladla.

“I live in the same area in Caluza,” she said. “The roads I drive on every morning are bad. There are potholes in all the roads. Everyone knows the current state of Msunduzi. It is hard for every ward, not only for ward 20. There is no budget … I wish the matter can go further, up to national level so that they intervene.”

She said there was a project to build 59 houses to replace some of the crumbling homes.

Msunduzi spokesperson Thobeka Mafumbatha said the municipality is working on a turnaround strategy and is aware of the challenges and backlogs.

“We do appeal to the community to be patient with us and apologise for any inconvenience,” she said.