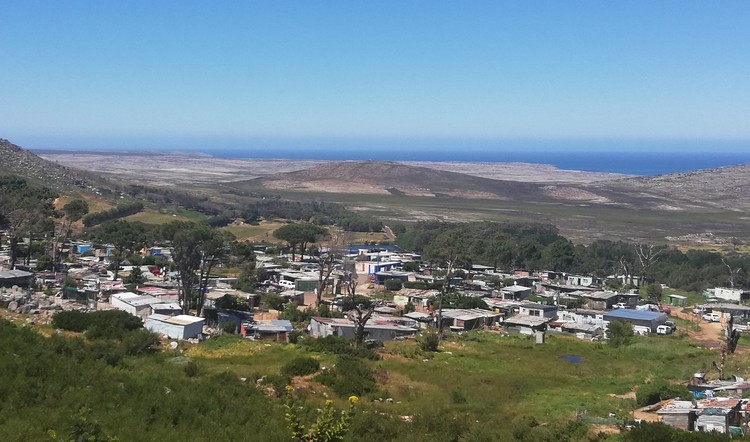 Residents of Redhill near Simon’s Town in Cape Town have been waiting years for government housing. Photo: Thembela Ntongana

“When Mandela was released from prison in 1994 I was staying in this place and had been here for years.” Sixty-six-year-old shack dweller Nowethu Ngxangana is one of hundreds hoping for a house in the new Dido Valley housing project.

The small community of Redhill, on the mountain slopes overlooking Simon’s Town, is home to 652 households, according to the City of Cape Town, including 182 families who rent from other families.

Ngxangana lives in a four-room shack with her 11-year-old granddaughter in Redhill. She does not remember exactly which year she moved here, but she has been here for many decades.

The housing project in Dido Valley will contain 600 units, of which, according to City of Cape Town Media Manager Luthando Tyhalibongo, 100 will be set aside for families who who were forcefully removed from Luyolo in Simon’s Town in 1968. A limited number of units will also be made available to applicants from all over the city who have been on the housing waiting list the longest.

“Everyone who comes here promises housing like it will happen in the next year, and we have been waiting patiently for many years,” says Ngxangana. She says many people who moved to Redhill when she did have given up waiting and have left. Some have moved to Masiphumelele, 16 km away.

“Those who got tired and moved to Masiphumelele many years ago have houses now and we are still staying in shacks with no indication when we will be in our houses,” said Ngxangama.

Her neighbour, 68-year-old Elizabeth Fete, was a domestic worker in the area for more than 20 years. She lives with her five grandchildren. Fete recalls a protest held by the community in 1996.

“That was the first time that the people of this place stood up and protested and demanded services. After that we got electricity, and promise after promise came on when we would get houses. Each time it’s a different promise.”

“When we moved here, the Masiphumelele community didn’t exist but now almost everyone there has a house and we are still waiting,”.

“Here if you do not catch a taxi in the morning you have to hitch-hike. On the land where the new houses will be the mall is closer, and the taxis are there. We want to move, for a better life where we have toilets inside and can get to clinics and hospitals easily,” said Fete.

She says last year Redhill residents were told they would be in their houses by June 2017 then the date was moved to November 2018.

“All we are seeing now is trees growing back on that land with no houses. We are left to wonder when the next promise will be made and whether we will ever get those houses or die living in these shacks,” says Fete.

Asked why the construction of houses had not yet started, Tyhalibongo said the budget was moved to the 2019/20 financial year and that not enough housing beneficiaries had been identified.

He said it was not yet clear how many people would qualify for a housing subsidy. “However, it is the intention of the project to accommodate the entire population of Redhill.”

Tyhalibongo said tenants would generally have to move with their landlords. If there were extra units available after all owners had been accommodated, tenants would be considered for housing.

He said engineering work had been completed in January 2018 and construction of houses was due to start in July 2019.