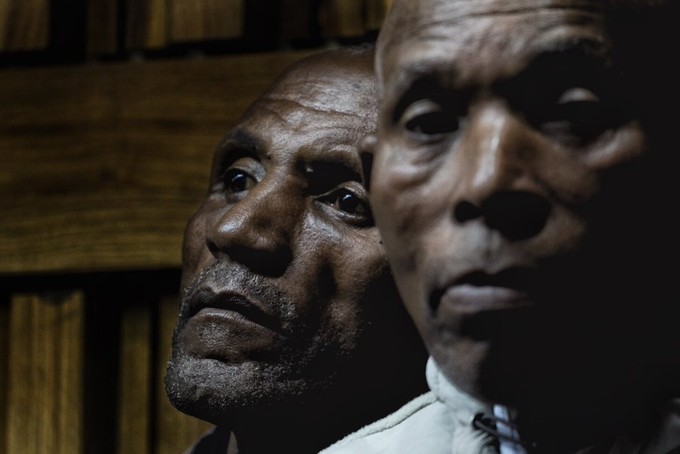 Matela Hlabathe and Vuyani Elliot Dwadube listen to the judgment in court. Hlabathe got sick with TB three times while working underground for 36 years. He received R39,000 compensation. Dwadube worked for Harmony Gold for 16 years before being retrenched in 1995. He has TB but has never received compensation. Photo: Shayne Robinson

Judge Phineas Mojapelo handed down judgement in the landmark silicosis court case this morning in the South Gauteng High Court. He certified two classes of miners, those sick with TB and those sick with silicosis. This means that miners who have had these diseases can bring a class action lawsuit against the mining industry. Here is the judgment (PDF, 5MB).

The court also ruled on the issue of transmissibility: families of dead miners can also sue the mines and be awarded general damages. This is a development in the common law.

One of the applicants, Luduko Enoch Madindala, travelled from Welkom, where he lives in an old mine house, to Johannesburg to hear the ruling. He contracted silicosis and TB while on the mines. He told his story to photographer Thom Pierce:

When the mines closed down they sold off the accommodation to the miners and their families. He worked on the mines for 29 years and played soccer for the mine team, The Lorraine Lions, at the weekend. “In the hostels we would stay with 15 people in one room. The food was bad, even the toilet was next to the kitchen. The bed was cement with a thin mattress and people would smoke in the rooms.” Madindala believes that the mines abused them. “We worked very hard and there was not enough money.” When he first started, they would earn R136 per month and by the end they were taking home R1,600 per month.”

“I feel very happy,” Madindala told GroundUp after this morning’s ruling. While he has received some compensation, he is hoping for more.

A lawyer involved in the case explained to GroundUp that now either the mines will settle, or there will be a class action lawsuit. If it continues to court, there will first be a determination of common issues to all miners. And then issues affecting individual miners will be dealt with. The court said that this is the only viable option for the mineworkers to have access to justice.

“The benefit of this ruling is that common issues can be dealt with in one big hearing,” said John Stephens, an attorney with SECTION27.

There was elation at court after the judgment. Lawyer for the miners, Richard Spoor, wrote on Facebook: “We won! Silicosis class action certified. Viva!”

A group speaking for the mining industry, The Occupational Lung Disease Working Group, responded to the judgment:

“The companies are studying the court’s decision. Each company is yet to decide whether to lodge an appeal against the finding.

Either way, it should be noted that the finding does not represent a view on the merits of the cases brought by claimants.

The companies remain of the view that there are issues related to compensation and medical care for occupational lung disease that need to be addressed through engagement between stakeholders, with a view to designing and implementing a comprehensive solution that is both fair to past, present and future gold mining employees, and also sustainable for the sector. They therefore remain committed to achieving these goals.”

Read our extensive coverage of the case here.