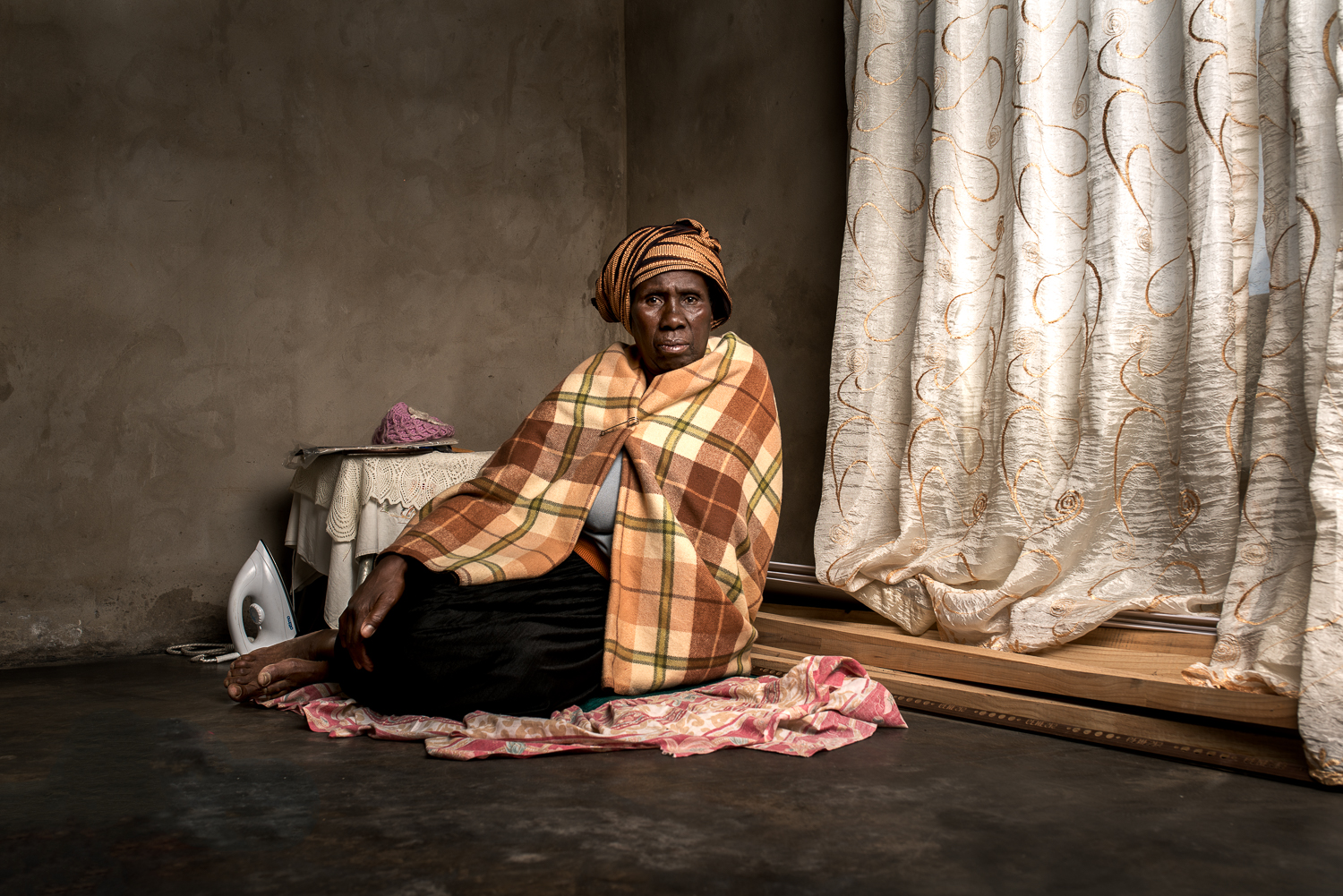 Makatleho Selibo is the Widow of Mahola Selibo who worked as a team leader at President Steyn mine in Welkom. He worked underground for 33 years. He passed away in 2013 and suffered from tuberculosis and silicosis. He did not receive any compensation from the mines. On the weekends at the mines he would run a shoe repair business, fixing the broken soles of his colleagues’ shoes. The couple had four children and she now survives on subsistence farming and livestock. Photo: Thom Pierce

While they appeal against the historic silicosis judgment in May, the mining companies are trying to change the whole workers’ compensation system to their advantage, writes Pete Lewis.

Last Friday the six largest gold mining companies announced that they had filed for leave to appeal against the ruling of the South Gauteng High Court on the huge class action by up to half a million current and former gold mine workers suffering from silicosis and/or TB.

The mining companies, through their working group are energetically pursuing a strategy which includes a set of sticks and carrots for the South African state, organised labour, and civil society. Their plan is to settle with the mineworkers if they drop their class action, and to change the whole of the workers’ compensation system; no more, no less.

The strategy has several pillars. First, the mines are supporting two relatively recent projects. One is the Ku-Riha project, to expedite the enormous backlog of unsettled compensation claims under the Occupational Diseases in Mines and Works Act (ODIMWA) in the Mine Compensation Commissioner’s office. These number in the tens of thousands, but this is a pin-prick compared to potential claims.

The other project is to set up a network of “one-stop shops” in a few rural and peri-urban settings in some mining districts. These networks, operated and largely financed by the Department of Health, are supposed to identify and assist other former mineworkers with silicosis and/or TB with diagnosis, documentation, remedial services, and compensation claims under ODIMWA.

Both these projects have been discussed in parliament but there are no official reports on them as yet. To deal with the immense burden of disease across the sub-continent, much more money and expertise will be needed. But the mines are not suggesting that the entire costs of Ku-Riha and the one-stop shops should be shifted from the state to the industry. Furthermore, the administration costs of the ODIMWA compensation fund have always been met by the Treasury, and the mines do not propose that these costs should be borne in future by the industry. Under these circumstances, and with increasing fiscal austerity of the State, and in the light of the proposed National Health Insurance Scheme, these projects are not likely to be up to the task.

The second pillar of OLDWG’s proposal is that in the future, all compensation claims for silicosis and/or TB by mineworkers should be transferred to the Compensation for Occupational Injuries and Diseases Act (COIDA), which at present covers occupational disease outside the mines. They suggest that this can be achieved in the current year.

The mines correctly state that this will significantly improve the statutory benefits to mineworkers in the future, introducing larger payouts, payouts to family members under some circumstances, and lifetime pensions for mineworkers whose disease is sufficiently severe.

But this must be balanced against possible disadvantages for mineworkers. COIDA grants the employer immunity against civil damages claims for negligence – it is a cast iron “no fault” insurance system. Future sick mineworkers will lose their right to legal remedy in civil damages claims, established after long and exhausting litigation in 2011 in Makhayi vs AngloGold Ashanti, which the industry took all the way to the Constitutional Court.

Furthermore, COIDA does not include any comparable right to payouts based on mandatory lung and heart autopsies if workers die in mine service of any cause, nor to free two-yearly medical examinations, both of which are enshrined in ODIMWA.

In addition, currently, under ODIMWA, if you work in “risk work” ( underground in a “controlled mine or works”) and you contract TB, you are automatically entitled to compensation, and this appears in the Act itself. The COIDA standard is much weaker. It appears merely in a regulatory “circular” in terms of the Act, easy for any future Minister of Labour to change in a way that further restricts it.

Again, COIDA puts the onus of compensation on the employer of a worker, not on the owner of the mine, where ODIMWA and the Mines Safety and Health Act place it. Production workers are increasingly employed by construction companies and labour brokers in opaque “supply chains”. Under COIDA, these thousands of smaller operators will be responsible for paying COIDA premiums to the Workers’ Compensation Fund and providing the necessary documentation for claims by sick and increasingly unprotected and “temporary” workers for silicosis and/or TB. Good luck with that.

To add to the downsides for workers, both the COIDA accident fund and the ODIMWA Compensation Fund, though possessing mountains of cash, are in chaos, for different reasons. Neither has demonstrated actuarial balance between actual assets and liabilities. This renders statutory reporting obligations meaningless, making a mockery of regulatory, parliamentary and even judicial oversight, as seen in the case of the previous COIDA compensation commissioner Shadrack Mkhonto. The Department of Labour’s response to this situation, far from fixing it, has been to privatise the process. Last year the COIDA accident fund passed on the metals and engineering industry to the Rand Mutual Association - an insurance scheme effectively owned by the mining industry.

Instead of proposing that ODIMWA and COIDA should be fixed, with better benefits for mineworkers, the gold mines are now proposing transferring future mineworkers with compensable respiratory disease from one chaotic scheme to another.

The mines suggest that none of this really matters because the industry is on the way to controlling and eliminating silicosis from the mines, thereby reducing the risk of TB as well.  The industry has committed itself to zero cases of silicosis among mineworkers who started underground work after 2008, and is considering halving the current legal exposure limit for respirable silica, to bring it into line - finally - with international standards. So the future cost of silicosis/TB compensation amongst gold mineworkers to the COIDA accident fund will shrink rapidly to nothing, or at least to “acceptable levels”, say the mines.

But because silicosis takes time to develop, they say, we cannot be sure until 2028 whether this commitment has been met.

However, there are two ways to obtain knowledge in advance on this. The first is for the industry to fund independent annual analysis of autopsy data on mineworkers who die in service. The last time such research was conducted it showed a significant increase in silicosis and TB amongst mineworkers at all age groups between 1975 and 1991. The second is for the industry to revolutionise its dust monitoring procedures, and outsource them to independent agencies under Department of Minerals and Energy scrutiny and reporting. Real time actual full-shift exposures, showing peaks and troughs experienced by the worker during the shift, correlated with camcorder footage of precise work activities, have been in use in the USA and Scandinavia and other countries such as Australia for at least ten years. ) Using these techniques would measure ongoing actual incidence of disease, and actual background and spike exposures, and their causes, without requiring any statutory or regulatory change. Yet the mines do not propose to use them. Why?

In the absence of these two measures, and given the industry’s past performance on dust control, there is absolutely no reason to accept the gold mines’ assertion that silicosis and TB compensation are exclusively “legacy issues”.

The final proposal is to make a single ex-gratia “top-up” to claims by sick former mineworkers to the ODIMWA compensation fund, provided that they drop their class action for actual damages. This would allow the industry to fix the settlement figure within a range that its shareholders can swallow, and spread it over time as the ODIMWA process grinds slowly on, and as the gold industry continues to retrench in South Africa while moving production and exploration to other more profitable countries.

What are the rules for determining this “top-up”? The gold mines are not saying. But if the process takes into account the individual severity of disease, unmet medical costs, and lost income, it would have to replicate the process envisaged in the class action case anyway. Nor is it clear whether or not the offer is to be extended to the families of workers who die before settlement, as it actually was in Blom vs Anglo American. The gold mines have appealed this “inheritance ruling” by the South Gauteng High Court. But then, an unsettled ODIMWA claim expires at death of the claimant anyway, so no “top-up” need apply.

What is clear is that the mines’ “top up” offer only applies to those workers who manage to get to the end of the ODIMWA compensation maze, and that it is dependent both on the mineworkers ditching the class action and on the merger of COIDA and ODIMWA going ahead.

These “proposals” are a big ask, especially if we take into account other claims on the horizon, such as the burden of “black lung” among underground coal mine workers. If the gold mines’ proposals are accepted and enacted by government, they will apply to these workers as well, who in turn will have to forgo their own “day in court”, and rely on the tender mercies of COIDA. Good luck with that.

Pete Lewis is a former senior researcher at the Industrial Health Research Unit at the University of Cape Town. This is the second of two articles on the implications of the silicosis court judgment in June. The views expressed in this article do not necessarily reflect those of GroundUp.