Silent march against violence at the University of Johannesburg 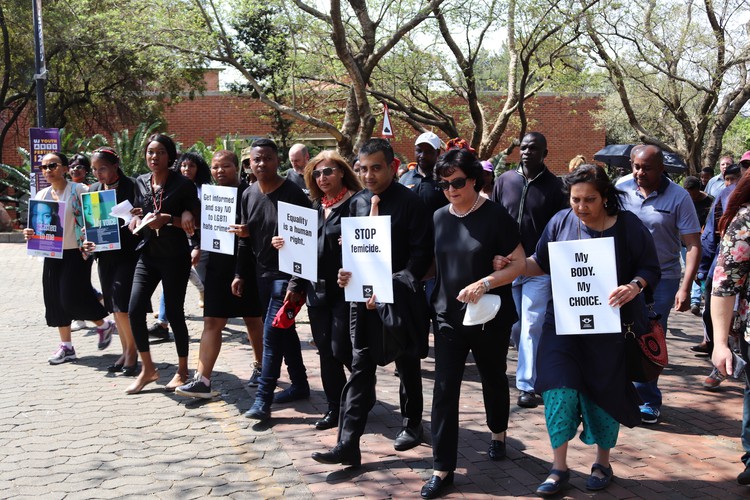 A silent march against violence was held across the four campuses of the University of Johannesburg on Monday. Photo: Gaby Ndongo

The University of Johannesburg (UJ) hosted a silent march against violence across its four campuses on Monday.

The march was part of nationwide protests against gender-based violence sparked by the murder of UCT student Uyinene Mrwetyana.

Angina Parekh, member of UJ’s executive committee, said the marchers denounced the use of power to perpetuate inequality, discrimination and abuse against women, queer people, and children.

Speaking after the march at the Auckland Park campus, she said conversations about the role, importance, and respect of women and children should not be restricted to women’s month, August. “For the rest of the year we are silent, and I think what we are saying today is that it has to stop,” Parekh said.

The march, with protesters carrying posters saying “My Body. My Right”, “Human Rights Belong To Everyone” and “Not In Our Name”, took place during the university’s Diversity Week, which seeks to promote equal treatment.

Members of the university’s Auckland Park student representative council (SRC) handed a memorandum of demands to the university executive, demanding the suspension of classes until issues such as the safety of students living off campus is addressed. Other demands include self-defence classes, and safety kits with pepper sprays.

“Students are fearing for their lives. How are they supposed to study and be students when they are being kidnapped and raped?” asked Mxolisi Ngwenya, acting SRC chairperson.