Eviction order is in place says councillor, but occupiers vow to resist 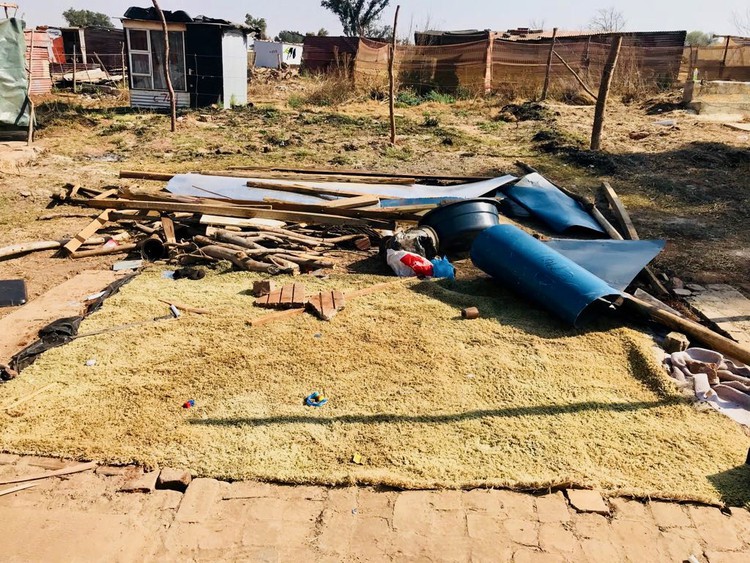 Sibongile Nkosi’s shack in Old Brakpan was demolished while she was out looking for work. Photo: Kimberly Mutandiro

A showdown is looming over the occupation of land in Brakpan.

“An eviction order is in place and will be given effect by the Ekhurhuleni Metro Police Department to remove the illegal land invaders,” councillor for Brakpan North Brandon Pretorius says.

But Robert Mutukana, a community committee member, says, “Some of us have been living in the Old Brakpan location for over five years. It makes no sense that the municipality wants to remove us. Where do they want us to go?”

Community members say they will have a meeting with the municipality later this week to try to stop evictions. If an agreement is not reached, a protest march will take place.

According to Pretorius the current occupiers must be moved to make way for a mega-housing project on the Old Brakpan site, from which 7,000 people are to benefit.

GroundUp previously reported that EFF and ANC were competing to lead occupations on the land.

Some of the occupiers say their ancestors lived on the land and were forcefully removed during apartheid.

“l used to visit this piece of land when my aunt lived here before they were forced to move. l feel a strong sense of belonging to this land,” says Grace Masego.

She wants to set up a home for herself and her three children; it was her late aunt’s wish that one day they return to their land. She was renting a shack in Tsakane with her three children before moving to Brakpan a year ago.

“It’s all about knowing the right people in the informal settlement, that’s how l got here,” says Stanley [surname withheld], a new occupier who was promised by community members that he would not be evicted. He feels lucky to have a plot. He was renting a shack for R300 a month in Kwathema. He has been at Old Brakpan for two weeks now. Stanley insists he did not pay for the plot, but he acknowledges that some people are paying up to R2,000 for plots to an unnamed person.

City of Ekhurhuleni spokesperson Themba Gadebe said, “The department has planned one of its mega-housing developments to be implemented in a period of five years.”

According to the municipality the housing project will benefit people from the following areas: Never-Never, Weltervreden, Brakpan North, Daggafontein and Brakpan Old location.