Show of force by SAMWU in PE 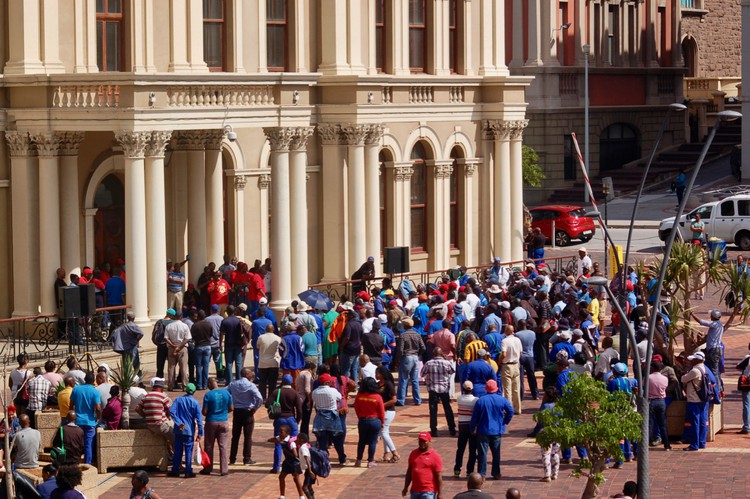 South African Municipal Workers Union (SAMWU) members gathered outside the City Hall in Port Elizabeth on Thursday afternoon to convene their first general meeting this year on the doorstep of its employer.

SAMWU regional secretary Melikhaya Kortjan said the union decided not to have its general meeting at Nangoza Jebe Hall in New Brighton, because “our employer is stationed here … Whatever we’re going to discuss today, we want them to hear.”

Workers arrived in trucks and buses from Uitenhage and Despatch. In a show of force, they sang songs boosted by giant speakers which echoed up to the mayor’s office in the City Hall – songs such as “You work hard for SAMWU” (iSamwu iyasetyenzelwa) and “SAMWU isn’t joined via tenders” (iSamwu ayijoyinwa nga tender).

Workers discussed issues such as overtime, transport allowances, the suspension of certain municipal workers, and the scarce skills allowance.

“This is just the beginning. There are many other gatherings of this nature that we’re going to embark on. We won’t stop up until our demands are met,” said Kortjan.

Kortjan accused local government of not complying with an agreement achieved after SAMWU’s last industrial action. “We have been engaging with the new administration in boardrooms, but our workers demands have been falling on deaf ears,” said Kortjan. (In September 2018 a new coalition government came to power ousting the DA-led coalition.)

Regional chairperson of Samwu, Nomvula Hadi, who led the singing, said, “We know the sun is scorching but when you are in trouble, you even resist the sun.”

She told workers to bow their heads and close their eyes. “We will call on the Lord to prepare the hearts of those who are upstairs [in the municipal offices].”