Shop owner a no show at Equality Court hearing 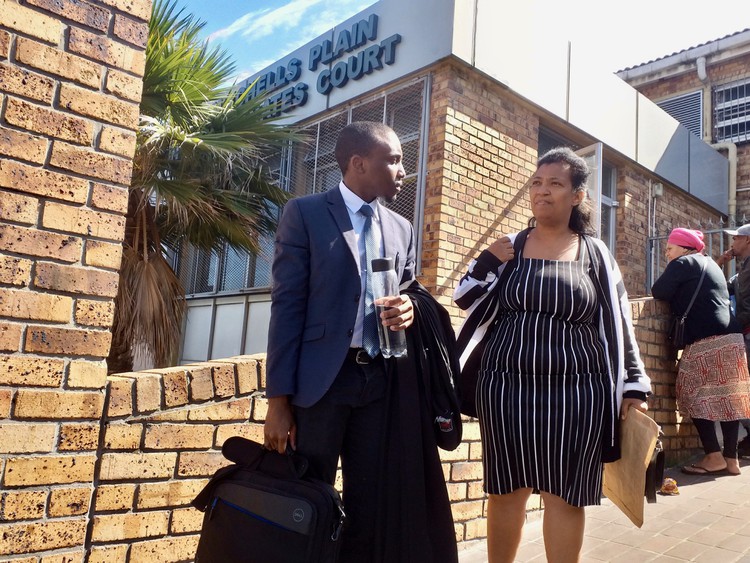 Liezel Haskin and her lawyer Nkosinathi Thema outside the Equality Court in Mitchells Plain on Friday. Photo: Barbara Maragele

The notice to appear in court served on the owner of a store where Liezel Haskin’s son was denied access was not done in time said Mitchells Plain Magistrate Rene Hindley in the Equality Court.

Haskin’s five-year-old son, Connor, has Down syndrome and developmental delays associated with West syndrome. He requires around-the-clock care and he uses a special-needs wheelchair known as a buggy.

In April, Haskin went to a superette in Woodlands, Mitchells Plain, to buy groceries. She was told she could no longer enter the store with Connor’s buggy.

Haskin told GroundUp that she explained to the staff that she was a single mother and could not leave Connor without proper care. She was told to either “leave Connor in his buggy at the door or carry him while shopping in the store”.

The National Council of and for Persons with Disabilities referred Haskin’s case to law firm Webber Wentzel. Candidate lawyer Nkosinathi Thema and attorney Odette Geldenhuys are now assisting Haskin to take the store owner, Salaudin Khan, to the Equality Court.

They argue that the way Haskin and Connor were treated is in direct breach of the Equality Act, which states that discrimination on the basis of someone’s disability is unfair.

The case had been set down for a directions hearing on Friday, the purpose of which is for the magistrate to advise the parties on how to conduct the case.

But Khan didn’t pitch up. Hindley asked if adequate steps had been taken to ensure that Khan was aware of the proceedings. Notice should be served 14 days before the hearing date. The delay was with the Sheriff’s office and Hindley urged Thema to ensure that notice was served on Khan personally.

“If he is trying to evade, the Sheriff has to indicate what his problems were in trying to serve Mr Khan,” she said.

Hindley said she would meet with the Sheriff’s Office this week to discuss issues related to their conduct.

The matter is expected to return to court on 11 November.