Shooting whales in an eco-friendly way

And you can take part too! 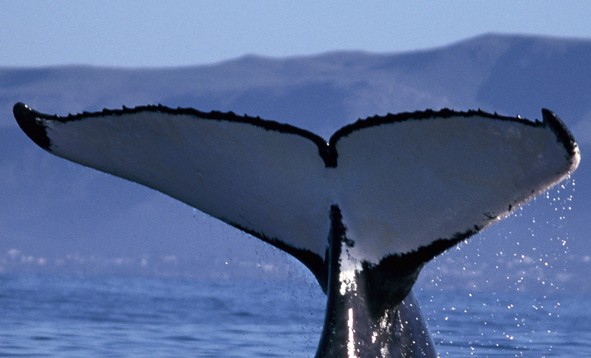 All whale tails (flukes) have differences in colour and shape, enabling scientists to identify each mammal individually. Photo: Ken Finlay

An ambitious “citizen science” project that promotes the shooting of whales in an eco-friendly way, has been launched in Durban.

Almost hunted to extinction forty years ago, whales are now at the heart of a ‘citizen science’ project launched in Durban today by Wildlands in association with Grindrod Bank and The Blue Fund.

It is called WhaleTime and engages the public in monitoring the migration of more than 10,000 whales along the KZN’s coastline from July to November each year. To participate in this project, people simply upload photos of whale sightings on the WhaleTime website, along with the GPS position of where each photo was taken and other information about each whale encounter.

The envisaged outcome is an interactive, public database on whale populations, behaviour and habitat use.

“All sightings, from either a boat or the shore, should be reported as long they are accompanied by a photo,” said Wildlands’ Strategic Manager, Mark Gerrard.

Gerrard said the WhaleTime crew were particularly keen on photos of whales in action: blowing, breaching, fluking, lob-tailing, sailing or sky-hopping – a term for a whale ‘standing’ with its head above the water surface, enabling it to check out its surroundings.

The project also aimed to promote ethical whale watching protocol, including that a boat should not venture closer to 300m from a whale (unless one has a research or whale watching permit).

Gerrard said the associated educational aspects of the project would not only make people aware of how close several species of whales came to extinction, but also highlight new threats that whales face today. For instance, many people do not know that Durban once had the largest land based whaling operation in the world.

WhaleTime’s Summer Newton, a marine science masters student from Nelson Mandela Metropolitan University, reckons more than 28,000 whales were hunted and killed off Durban’s coastline between 1907 and 1975.

In Facts About Durban, archivist Allan Jackson describes how these whales were killed with metal harpoons loaded with explosives, then pumped full of compressed air for towing back to shore. The bloated carcasses were then heaved up a slipway of the whaling station on the Bluff for processing. It was not only whale oil rendered from blubber that was in great demand back then, said Jackson. Almost every last fragment of the huge creatures, from bone to skin and flesh, was used for something: lubricants for machinery, candles, cosmetics, pharmaceuticals. Whale meat extract was also used to make instant soup.

Newton said by the end of the whaling period – South Africa banned whaling in 1979 – it was estimated that there were as few as 340 humpback whales and less than 100 southern right whales left in the southwest Indian Ocean along the coast of South Africa. Through on-going conservation efforts these two species have partially recovered. Latest surveys suggest that as many as 7,000 humpback whales and more than 1,000 southern right whales migrate past Durban each year.

But marine scientists are concerned about new threats to whale populations and behaviour, including entanglement in fishing gear and shark nets, collisions with ships and noise pollution. Seismic surveys used by the petroleum industry to locate gas and oil reservoirs under the seabed have also become a serious concern. The use of active sonar disturbs whales and can disrupt their migration.

Just as every dog and cat has a unique coat, so do all whale flukes have diverse characteristics, from colour through to shape. Getting good pictures of humpback whale flukes will help Newton create a photo-identification catalogue featuring individual whales. The WhaleTime crew will then be able to collaborate with other scientists in tracking the behaviour and movement of these individual whales around the world.