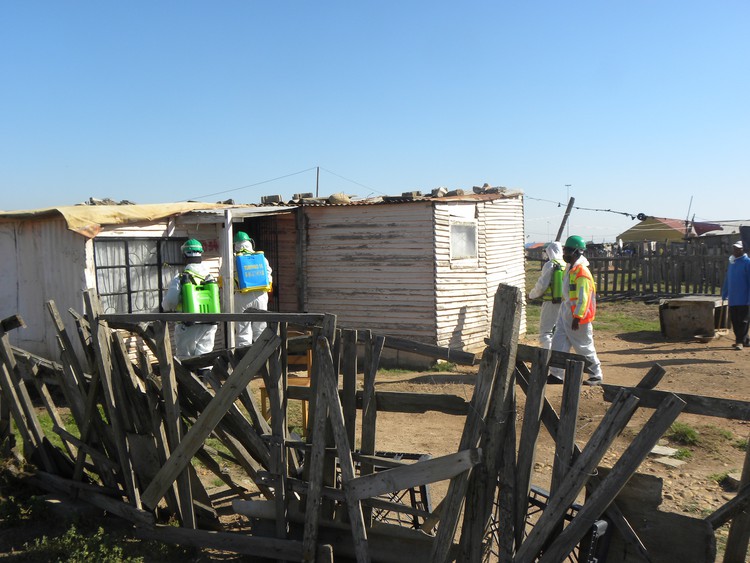 Dozens of shacks were disinfected on Wednesday as part of the Nelson Mandela Bay Municipaly’s pilot project to slow the rate of Covid-19 infections in townhips. Photo: Joseph Chirume

A new project to disinfect and “deep clean” shacks in informal settlements across the Nelson Mandela Bay metro has been met with mixed reactions from some residents.

While many have welcomed the pilot project, some community members fear that deep cleaning informal settlements does not address serious concerns like overcrowding and the lack of access to adequate sanitation and water.

“Deep cleaning” itself is dismissed by scientists as pointless against Covid-19. Normal regular cleaning with standard household products is sufficient.

The municipality kicked off the project by disinfecting shacks in Sharpeville, Silvertown and Masakhane informal settlements in ward 24, KwaZakhele.

The metro is one of the hotspots for Covid-19 cases. As of 21 July 2020, the City had recorded 17,410 Covid-19 cases with Uitenhage, KwaNobuhle, KwaZakhele and Motherwell recording more than 1,000 cases each, said acting Mayor Thsonono Buyeye. And 400 confirmed Covid-19 deaths were added to the Eastern Cape’s toll on Wednesday, the highest one-day increase yet.

“Informal settlements are the most vulnerable to Covid-19 due to the dense population. Most of the people who live in the informal settlements are poor and cannot afford to buy sanitizers. We took a bold decision to limit the chances of infection by sanitising their houses inside and outside and public shops as well as taxi ranks,” said Buyeye.

However, some residents of Sharpeville informal settlement complained that they were unable to wash their hands as most of the communal taps were vandalised and that they still used buckets to relieve themselves.

“We are glad with the sanitisation and disinfection programme but we want to have water taps so that we can regularly wash our hands. Most of the taps were vandalised and they were never replaced,” said community leader Nompumelelo Tili.

“In order to combat the spread of the virus, we need to live under better sanitation conditions. We want residents to be relocated to better places in order for us to defeat this virus,” said Tili.

Sharpeville resident Thembakazi Chefu lives in a shack with eight family members, all of whom are unemployed. “It is a good action by the municipality to spray our shacks, but the only way to combat the spread of coronavirus is to eradicate all informal settlements by relocating people to better places,” she said.

“Will the municipality continue coming here to disinfect the area?” asked Chefu.

The City’s environmental health deputy director Dr Patrick Nodwele said, “We believe we can’t fight this if our surroundings are not clean. We are here to clean and sanitise so that if the virus has already spread in our residential areas we can kill it with the chemicals that will be used.”

A Uncedo Taxi Association driver at the Daku taxi rank said they have a strict compliance system where passengers are sanitised before entering taxis. “We force our passengers to wear masks and we sanitise them. We also sanitise the money they give us so that the virus does not spread.”

Municipal spokesperson Mthubanzi Mniki told Groundup that they will be supplying residents of informal settlements with sanitisers when stock arrives.