Shacks demolished for fourth time in Tembisa since lockdown eased 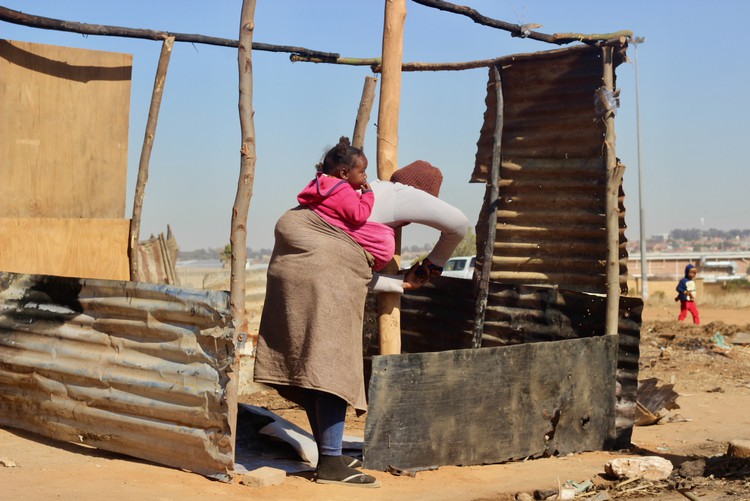 Some occupiers rebuild their shacks after they were demolished by Ekurhuleni Metropolitan Police Department on 29 June. Photo: Nqoba Dlamini

The shacks of about 80 land occupiers in Vusimuzi, Tembisa, were demolished for the seventh time by the Ekurhuleni Metropolitan Police Department (EMPD) on Wednesday.

We visited the area the day after the fifth demolition took place on 29 June (there was a sixth eviction on 1 July). People were sitting in groups, some were rebuilding the structures, some people were selling atchar and bread.

The land occupation started on 7 March when about 40 shacks were built on vacant land next to Lindelani informal settlement and Mooifontein Cemetery.

Melidah Ngcobo, from shack dwellers movement Abahlali baseMjondolo, said the occupiers could not afford to pay rent and consequently had problems with their landlords. Some people had been waiting on the housing list for many years, she said. This is why they have occupied this land.

EMPD demolished the shacks two days after the first day of occupation on 7 March. “They [EMPD] burnt our materials while they were demolishing. They took all of our zinc materials and [they] burnt the wooden boards,” said Ngcobo.

She said the women had slept in a nearby church tent that night and the men made a fire and stayed outside. The following morning, they started to build two large shacks for the women and the men to sleep in while the other shacks were being rebuilt.

Ngcobo said EMPD came to demolish their shacks three times before the start of the Covid-19 lockdown on 26 March. They were then left to stay on the land for close to three months during lockdown before EMPD returned on 24 June to again demolish shacks, she said.

One of the occupiers, Novisisanani Thinta, said she needed her own place because she could no longer afford to pay rent. She is chronically ill and unable to work. She survives on her disability and children’s grants. Thintha said she has been on the housing waiting list since 2013.

She said in the first demolition on 9 March, law enforcement officers threw “my blanket, some clothes and my chair in the fire”.

Her neighbour, Johanna Nkosi, said she had been on the housing waiting list since 2010. She was involved in another occupation in 2018 where she was told to stop occupying because she would be given an RDP house.

Her daughter died and she now cares for her grandchild.

“I was so happy when I could stay in my own place here, but it was terrible when they demolished our homes and destroyed our materials,” she said. “I guess I will just keep trying to get my own place … There’s nothing else I can do,” said Nkosi, who is 66.

But EMPD spokesperson Lerato Monyane said it was not an eviction because the structures were deemed to be unoccupied and no court order was needed.

Spokesperson for the City Nhlanhla Cebekhulu concurred. He said court orders are only required to evict people after they have been in occupation for more than 48 hours.

Senior Attorney at Socio-Economic Rights Institute (SERI) Thulani Nkosi said that evictions during lockdown could not be justified. Nkosi said an eviction order was needed when structures constituted a home and there was no set time period for this. It depended on the judge hearing the case.

He accused municipalities of being “a law unto themselves”.

He said Abahlali baseMjondolo was considering instituting civil damage claims against the EMPD for the destruction of property during the demolitions.

“The burning of materials shows the heavy handedness and the violence the EMPD is using against the poor. This is utterly despicable because in many instances those materials constitute the sum total of the belongings our client possesses,” said Nkosi.

Monyane said only “rubble” had been burnt.