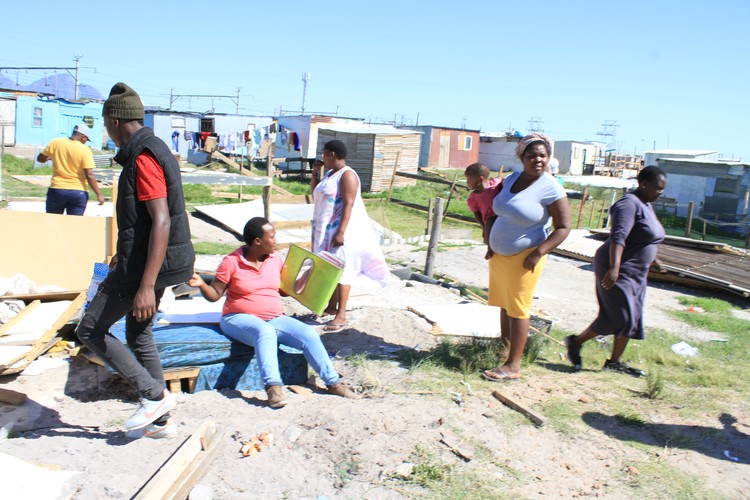 Samkelo Lufuno, 28, said residents were surprised when City officials arrived to destroy their homes on 14 February.

“It was during the day when we saw them coming and they didn’t ask anything from anyone”, said Lufuno. He said City officials destroyed the shacks while people’s belongings were still inside.

“We didn’t get a chance to take anything, because they were telling us that if we tried to fight them they would shoot us,” said Lufuno.

Thirty-five-year-old mother of two Cingelwa Mnqungu said many of the residents lived off social grants. “We used the grant money to build our homes and they just came and destroyed everything.”

Mnqunqu said residents had been occupying the land since July last year. “We are shocked that after so many months they decided to treat us like this. The worst part was that they made sure that we won’t be able to use the material when they destroyed our shacks.”

Few shacks were left standing after the demolition on Thursday. On Friday, while residents were trying to salvage what they could, law enforcement returned. Bulelani Gubela said the officers “did what they were sent to do and left us homeless”.

Booi said: “City law enforcement agencies removed illegally erected unoccupied structures from Lotus Park informal settlement in the Gugulethu area on Thursday and Friday last week. Although we understand the acute need for housing opportunities amid the great demand and space constraints that we are faced with due to Cape Town’s terrain and geographical position as a peninsula, we must also consider the health and safety aspects that could affect our residents. Land invasions also affect planned service delivery projects, as is the case here.”

He said he would meet with the leadership in Gugulethu to talk about the best interest of the entire community.