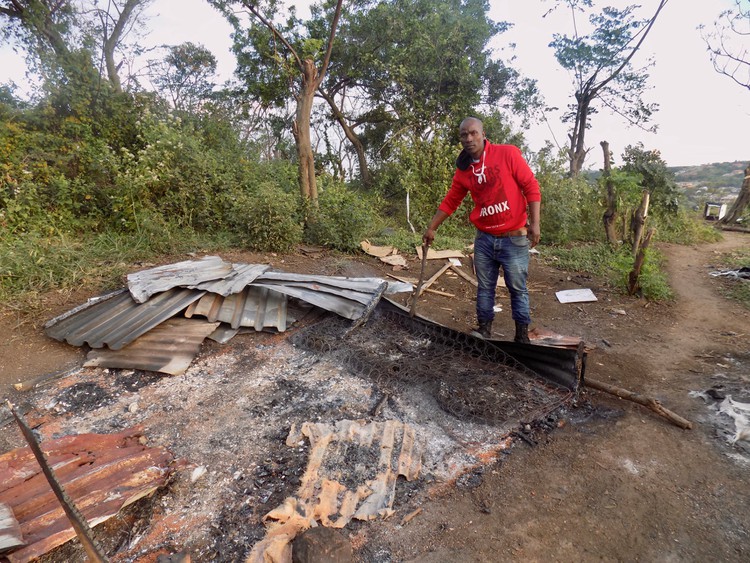 Mafa Zwane shows the remains of his shack. and his bed after the Land Invasion Department demolished his home. Photo: Musa Binda

A week after the most recent demolitions, residents from Azania Occupation in Cato Manor, Durban, endured yet another round of demolitions on Thursday. This time, their belongings were torched by law enforcement. Beds, cupboards, blankets and clothes were burnt. About 70 shacks were demolished.

Most residents were away when the Land Invasion Department struck. They were at the Durban Magistrates Court to lend support to 24 people from the eKhenana Occupation who were charged with public violence after resisting demolitions last year.

Azania resident Mafa Zwane described what happened. “I overheard people screaming and when I walked out of the shack, I noticed that the contingent was already beating some residents, forcing them out of their shacks and demolishing them.”

Zwane used to work at the Sun Coast Casino and rented a flat in South Beach, but when he lost his job in February last year, he joined the occupation.

Gugu Sipamla was also at home when the Land Invasion Department and Metro law enforcement arrived. She said she ran away, afraid of being beaten or shot with rubber bullets.

Sipamla said all her belongings were burnt. She didn’t know where she would now sleep. She has sent her sons, aged four and 13, to stay with a friend. She moved to Azania in February after she lost her job and could no longer afford to pay her rent.

Provincial secretary for the shack dweller movement Abahlali baseMjondolo (AbM), Mqapheli Bonono, said: “What is being done by eThekwini Municipality is against the law and we view it as criminal activity because they don’t only demolish shacks, they steal people’s belongings, beat them up, shoot them with rubber bullets. It worries us when they even decide to burn people’s belongings.”

Durban Metro Police spokesperson Superintendent Parboo Sewpersad said, “We get called by Land Invasion Department security management only if the crowd becomes volatile; only then we come for backup.”