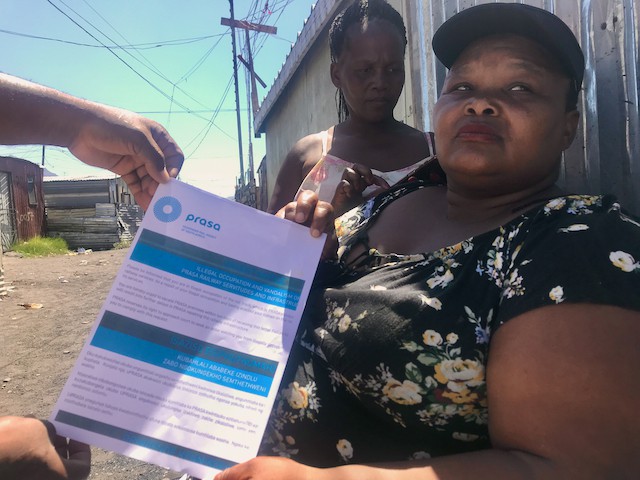 Siyahlala community leader Nomzomo Gatuya and Phatheka Sizani with the PRASA notice to vacate the informal settlement that is encroaching on the Central Line rails. Photo: Tariro Washinyira

On Monday the Passenger Rail Agency of South Africa (PRASA) issued shack dwellers in Siyahlala informal settlement with ten-days notice to vacate the tracks of the Cape Town Central Line in order for it to resume the train service.

In a statement on Monday, PRASA said it is ready to run trains again from Cape Town to Langa.

PRASA said it met with the Western Cape MEC for Human Settlements and the Mayor of Cape Town to help find a suitable site to relocate the people of Siyahlala.

“PRASA will temporarily use diesel locomotives while the process of repairing the infrastructure is underway … Tenders have already been advertised to reinstate the power supply system so that trains are able to operate,” read the statement.

It has also appointed a team of consultants to design and manage the construction of walls along the PRASA servitude.

Siyahlala was established in 2016 on PRASA land, a few minutes walk from Langa train station. Shacks were set up initially around an old railway line, but the settlement grew and eventually encroached on the Central Line as trains haven’t operated on it since October 2019. There are about 5,500 households now, according to a community leader.

The settlement has no sanitation and the narrow strip between the shacks and the train tracks is covered in garbage and faeces.

Community leader Nomzomo Gatuya, who shares a shack with seven people, said ten days is not enough time for them to relocate. Siyahlala leaders had hoped to address the time issue with PRASA on Tuesday.

But Gatuya said, “Our chairperson missed work to attend the meeting. To my disappointment PRASA sent someone to tell us the meeting has been postponed … To what date PRASA didn’t say.”

“We don’t have a place to go. We will become homeless. We cannot move back to our parents houses in the township. We relocated here because those houses were overcrowded.”

“Our children go to nearby schools in Langa township, if we move we won’t afford school transport. If we move many people who are walking to work in Epping will lose their jobs as they cannot afford transport. Many people here are unemployed …. Some were retrenched because of Covid-19. Relocation right now will make our life very hard,” said Gatuya.

Spokesperson for Western Cape Transport and Public Works MEC Bonginkosi Madikizela said, “There are ongoing discussions between the Western Cape Department of Transport and Public Works, Department of Human Settlements, City of Cape Town and PRASA. The focus is to find alternative land to relocate the people who are currently occupying the railway line.”

PRASA spokesperson Bane Ndlovu had not replied to GroundUp’s questions at the time of publication.