Dozens try to occupy land set aside for Maroela Project 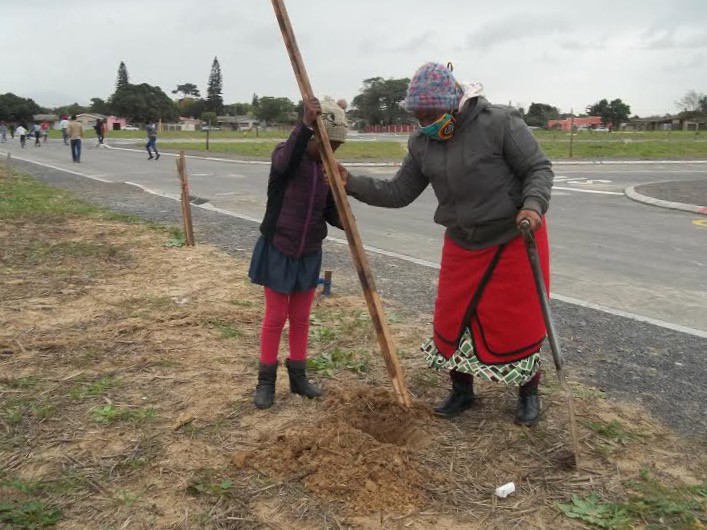 Shack dwellers from Wallacedene tried to stake out plots on the land intended for the Maroela Project at the weekend. Photo: Vincent Lali

Dozens of shack dwellers carrying spades and wooden planks attempted to move onto the land near Blue Ridge Stadium in Wallacedene on Friday. They used wood and stones to mark out their plots on land where 570 Maroela Project houses are to be built for them and others.

Sibusiso Gibson, Secretary of the Wallacedene Temporary Relocation Area (TRA), said the shack dwellers had moved onto the land because they did not know who would benefit from the Maroela project and wanted to secure their place. He said police had told the shack dwellers that their gathering was illegal and ordered them to disperse.

The construction of the houses is expected to start in October this year, according to Councillor Malusi Booi, the City of Cape Town’s Mayoral Committee Member for Human Settlements.

Booi said the Project Steering Committee (PSC), which included community representatives, ward councillors and city officials, was responsible for managing the selection of beneficiaries. “The PSC has been provided with a shortlist of beneficiaries. The list was forwarded to the then Project Manager of the Maroela Housing Project in 2018.”

It was up to the committee to recommend a split between beneficiaries who had been on the housing list the longest, special needs applicants, and those from the targeted areas, said Booi. “The recommended beneficiary split is then approved and endorsed by the Mayco Member.”

But Gibson said community leaders had sent letters to the PSC asking for a list of the beneficiaries, without success.

“We want to read the list and see if the majority of the beneficiaries are TRA residents.”

On Friday night, the shack dwellers received the list of beneficiaries from Ward Councillor Simphiwe Nonkeyizana, according to community leader Thobani Mathole.

Mathole said the community leaders had identified 370 families to be prioritised in the allocation of new housing.

The shack dwellers wanted to move onto their plots so that they could be around when the City built their houses, said Gibson.

“If our houses are being built while we stay elsewhere, it will be easy for corrupt officials to sell our houses or erf numbers to other residents,” he said.

Dumisa Malahle, chairperson of Wallacedene TRA, said the recent floods had forced the shack dwellers to leave their shacks and occupy the land.

“Everybody, including the elderly and disabled people, lives in the mud here. Floods make us cough,” he said.

The City had already constructed roads and put in storm water drains on the Maroela Project land and floods would not affect residents as badly, Malahle said.

Booi said his directorate was willing to investigate claims of irregularities in the allocation of housing. But, he said “illegal land invasions are against the law and pose great fire, safety, health and flood risks.”

“Having various new settlements forming in an unplanned manner, also poses a risk to the City’s informal settlements Covid-19 response,” he said.

Asked to react to the shack dwellers’ demand that they be allowed to move into their plots now, Booi said such a measure “would delay construction work.”