Seven years later, Tokyo Sexwale’s promise has not been kept

East Bank residents still waiting for their houses to be fixed 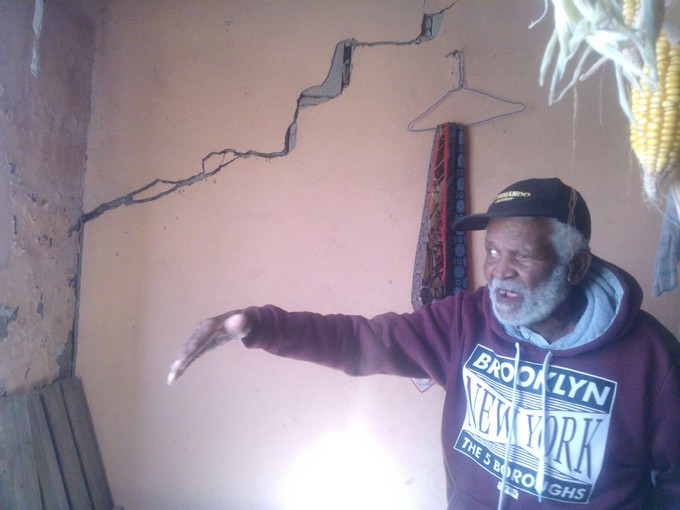 Pensioner Adriaan Job points to a crack in the RDP house he was granted in 2009. Photo: Abongile Ndevu

In 2009, then-minister of Human Settlements Tokyo Sexwale promised people living in faulty RDP houses in East London that their houses would be rebuilt. Seven years later, the residents of East Bank in Buffalo Flats are still waiting.

Evelyn Wood moved into an RDP house in East Bank in 2003. At first she was happy but not long after she moved in, the walls and roof started to crack and the rain dripped in.

She says she and other residents complained to the municipality, which promised to rebuild the houses but did nothing.

“We spent almost six years in them until Tokyo Sexwale instructed the Buffalo City Municipality to move us immediately to temporary houses.” Sexwale promised the government would spend R300 million fixing badly-built RDP houses in the Eastern Cape. Nombulelo Mabandla, who was then provincial MEC, promised to consider blacklisting contractors who did not complete houses properly.

But seven years later, Wood and many other residents are still living in temporary houses next to their RDP houses which have not yet been fixed.

When GroundUp visited the area Wood was sitting outside her small cluttered temporary house.

“When it is raining I have to put buckets inside the house and at night we must put plastic bags on the bed to prevent our blankets from getting wet,” she said.

Adriaan Job, an 85-year-old pensioner, also lives in a temporary house while he waits for his RDP house to be fixed. The temporary house has no electricity after the electrical box failed because of rain dripping through a cracked wall in his living room.

The front door of his RDP house next door is falling apart and he uses a long pole to prop up the house on windy days.

“It has been seven years now I have been staying in this small house. I must put buckets up when it is raining, store away my appliances, and cover up with plastic bags when I sleep,” says Job. He says he has complained several times to the council with no success.

Jennifer Mbanga, who lives with her family in an RDP house near the main sewage drain, says her husband has reported faults in the house several times at the municipal offices.

Buffalo City municipality spokesperson Sibusiso Cindi said the municipality was not aware of the poor standard of the houses at East Bank but would investigate.

“Our policy is that when low cost houses have been poorly built, we rectify them at no cost to the owner. I believe this is what will likely happen to the residents of this area after we’ve done our investigations.

Sexwale was Minister of Human Settlements until July 2013. He was succeeded by Connie September, who was then replaced with Lindiwe Sisulu, the current minister.

Lwandile Sicwetsha from the Human Settlements Department said: “Due to a large number of houses needing rectification, the Minister cannot go ahead with the plan to rectify all these houses, it takes time and money.”

Sicwetsha said the National Home Builders Registration Council (NHBRC) must take responsibility for the badly built houses because it had issued a certificate. The NHBRC should find the contractors responsible for the houses and make them correct the faults, he said.

Asked to comment, Samkelo Gqeba, spokesperson at the NHBRC in East London, said a technical team would visit the area and investigate.