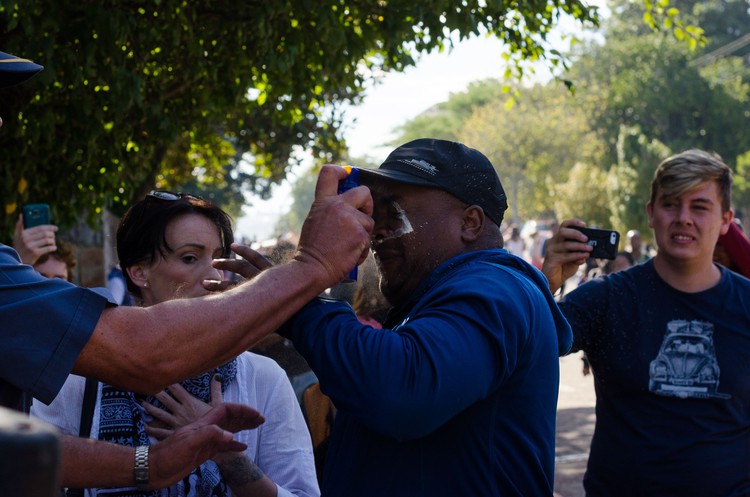 A Rhodes University staff member is pepper sprayed by a police officer after he joined a protest against rape culture in April 2016. Archive photo: Greg Roxburgh

Rhodes University has excluded two anti-rape student protesters from the institution for life. This was as a result of the #RUreferenceList protest in April 2016 against what students called entrenched rape culture at the university.

It followed the release of the names of 11 men accused of rape on social media. The university was accused by students of protecting the alleged rapists by not acting on reports and failing to offer support for victims.

The two expelled women were part of a large group of students attempting to take the men accused of rape to the police station. They were found guilty of going kidnapping, assaulting and calling out those accused of sexually assaulting others on campus.

The university’s decision triggered social media outrage which sparked the #RhodesWar online campaign. A number of students criticised Rhodes for its punishment of permanent exclusion. Many compared it to a separate case where a male student, who was found guilty of sexual assault, was excluded for ten years from the institution.

“Rhodes went around looking for people who were vocal on social media regarding the [#FeesMustFall] protests. In the trial they used screenshots of us organising protests as evidence. I got singled out for being vocal and pushing the awareness campaign around gender based violence,” said Yolanda Dyanti, one of the excluded students.

On Wednesday, the university published a statement responding to Dyanti and other students. It said her comments were “gross misrepresentation of facts” and “cynical attempts at manipulating public opinion”.

It said the students were “found guilty by an independent panel of committing common law crimes against their fellow students, including kidnapping and assault. It should be noted that, contrary to claims made by the students in the media and on online platforms, none of the kidnap victims were found guilty in any forum of any form of sexual misconduct or rape, even after thorough investigations were conducted by the University and the National Prosecuting Authority. These students were kidnapped, humiliated and tormented on the strength of an equivocal list published on social media by anonymous author(s) in which no allegation of rape against them had been made.”

The university management also said that the judicial process was “ventilated in processes involving the High Court, the Supreme Court of Appeals and the Constitutional Court” which involved an independent panel.

Dyanti believes they were targeted for being vocal during previous protests on campus in a bid to deter other students.

“Rhodes decided to make it internal because it had to make an example to show that committing crimes on the premises will not be tolerated. If that’s the case, 1,500 students should be disciplined because it sounds like we were the sole perpetrators,” she said.

Both students are appealing the university’s ruling at the High Court in Grahamstown. The Socio Economic Rights Institute (SERI), who are now representing the two, have called the university’s decision “disproportionate, unfair and unlawful.”

In a statement, SERI said this ruling was one of the harshest penalties imposed on a student at Rhodes in the last ten years.

Correction: An earlier version of this article incorrectly stated that Rhodes University announced the expulsion on 14 November.