Selling prickly pears by the side of the road

This is not a job for the weak, says Uitenhage woman 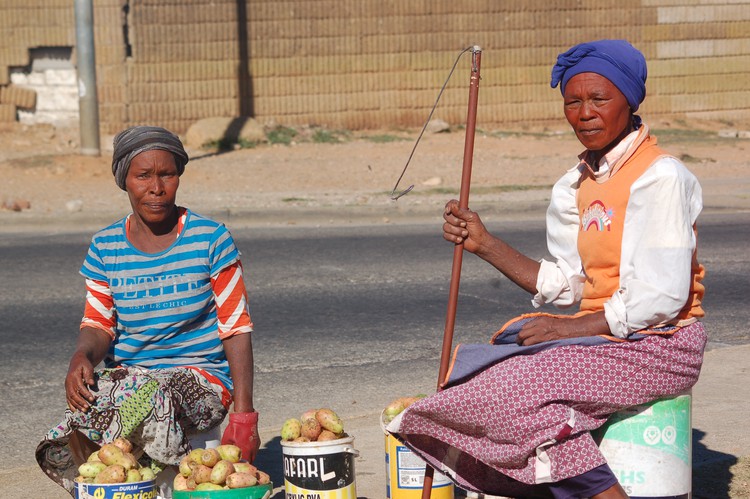 From January to April every year, Lindiswa Joyi and Nomathamsanqa Vumendlini travel daily from their homes in Uitenhage to a farm to pick prickly pears which they sell by the side of the road.

The women from KwaNobuhle township in Uitenhage sell the juicy fruit at R1 each.

Joyi, 70, says they leave at 6am in hired transport to Sandfontein farm where they have an agreement with the farmer. For R30 each they can harvest as many prickly pears as they like. They pick all morning, wearing boots as protection from the snakes and gloves to protect their hands from the prickly pear thorns, and return at 2pm.

“We carry a hook to harvest the prickly pears. When we come back, we feel like porcupines,” says Joyi.

“The skin is as rough as a dangerous porcupine,” says Vumendlini, 56. “No one can hug or touch us. This is not a job for the weak.”

They sell the fruit on busy Mabandla Road near the Jabavu Stadium.

“The job helps us avoid drowning in debt,” says Joyi. “There are many loan sharks in our townships. They charge you 50% interest when they lend you cash.”

Joyi receives an old age grant but says it is not enough. “My elderly friends entirely depend on grants which end in a few days … I’m trying to make extra money, by picking prickly pears. I am challenging others to do likewise … Neither women my age nor men want to do this kind of job. Most of them think that this is hard, but they love to eat the prickly fruit.”

She is a single mother with two grown up sons and five grandchildren. “What I do is to make sure we don’t sleep on an empty stomach.”

The women fill their buckets and then return to the town to clean the prickly pears, rubbing the thorns off on the grass and then washing the fruit.

Vumendlini has one son and three grandchildren. “We take home at least R300 each a day. Our customers include motorists, residents, jikelezas. We even sell on Sundays.”

Customer Mzimkhulu Mayo bought a bucket of fruit for R20. “These women are inspiring,” he said.