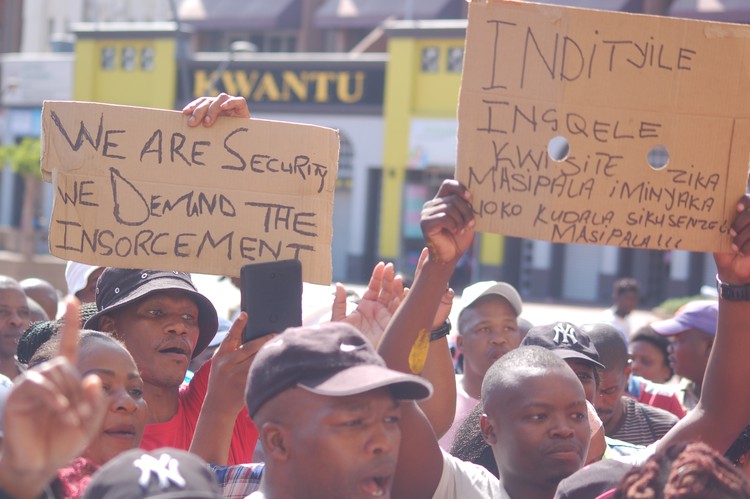 About 200 unemployed security guards in Nelson Mandela Bay protested outside the Port Elizabeth City Hall on Wednesday afternoon, demanding that the municipality give them jobs “as they promised”.

The singing guards demanded answers within seven days and carried placards saying: “Ndityiwe yingqele (I’m getting cold), “Siqesheni nathi” (Employ us as well) and “Asizoniyeka” (We won’t give up).

The security guards said that since the municipality had ended its contract with two private security companies, Fidelity and Metro, jobs had been scarce.

“We also want to be insourced,” he said.

Security guards protected municipal buildings, cemeteries, and houses of ward councillors and guarded against municipal cable theft at sub-stations, he said. “We must all be considered for employment by the municipality.”

Security guard Zibele Sabisa, who led the protest, said guards were in their fourth month of waiting to be insourced.

Petitions Manager Thembekile Mgwanza promised to hand over the petition to a “petitions committee”.

Municipal spokesperson Mthubanzi Mniki said only security guards working on municipal sites were being insourced. “If people were working at other sites that might have municipal offices, that does not qualify them for insourcing into the system. That’s how it works. “