“When we go to the toilet, we shit water because our stomachs are empty” 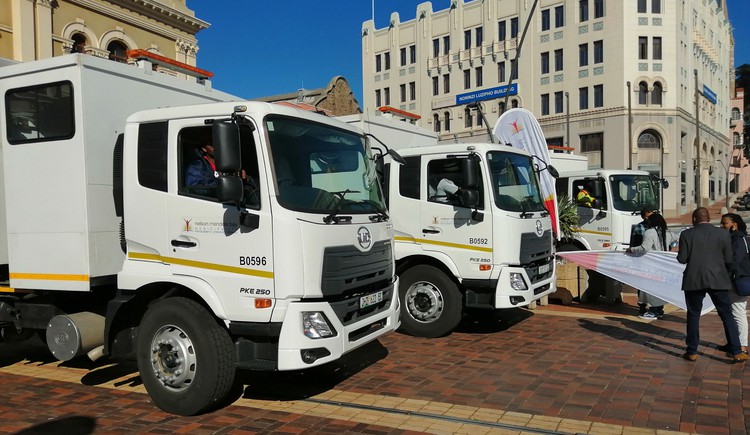 Unemployed security guards attempted to disrupt the unveiling of seven new trucks in Port Elizabeth city centre on Thursday morning. About 100 guards entered the Vuyisile Mini Square shortly before the unveiling of the multi-million rand fleet was scheduled to take place.

Five of the seven trucks were driven away, the drivers apparently fearing they may be damaged in the chaos. The trucks disappeared down Govan Mbeki Avenue.

The guards also protested in June. At that protest, municipal spokesman Mthubanzi Mniki said that only security guards who had worked on municipal sites had been employed. “Those who didn’t qualify for insourcing into the system used to guard buildings that were rented by the municipality … Unfortunately, those who did not guard municipal buildings were not recruited.”

Although Thursday’s protest aimed to disrupt the unveiling of the trucks, it does not appear that the new trucks are directly related to the demands of the security guards.

The protesters, who were singing and whistling, also shouted: Sidikiwe! [“We have had enough!”]. They sang louder when they saw Mayor Mongameli Bobani emerge from the city hall. He was accompanied by MMC for Roads and Transport Rosie Daaminds (ANC), ward 30 Councillor Mbulelo Gidana (ANC), and their bodyguards.

Gidana told the crowd, “Do you have a petition? We need something written in black and white … so that the mayor can respond accordingly.”

A protester shouted, “Kunini?” [“How many times?”]

Another shouted, “When we go to the toilet, we shit water because our stomachs are empty.”

Eventually, it was agreed that five representatives of the security guards would meet with officials to find a way forward. They met for several hours. But after the meeting protest leader Zibele Sabisa told GroundUp that no resolution had been reached. A further meeting was planned for Wednesday next week.