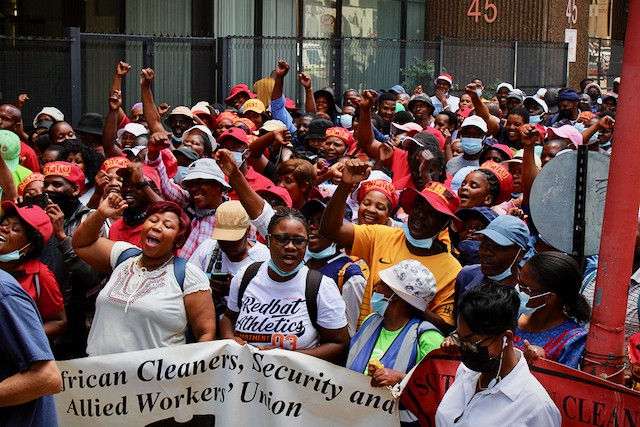 Unions are calling on the Gauteng Department of Health to insource all security guards and cleaners at hospitals. Photo: Masego Mafata

“I wish Nelson Mandela and Chris Hani were here to see how our brothers and sisters exploit us. We fought for democracy, but today’s apartheid is outsourcing,” said Andries Potsane of the South African Cleaners, Security and Allied Workers’ Union (SACSAWU).

Potsane joined more than 100 security guards and cleaners affiliated to SACSAWU and the National Union of Public Service and Allied Workers (NUPSAW) as they marched from Library Gardens to the Gauteng Department of Health in Marshalltown on Wednesday.

They are demanding that the department directly employ all security guards and cleaners working at Gauteng hospitals.

A memorandum of demands was read out by Sello Molaudzi, NUPSAW provincial secretary.

Mziyanda Ndevu, NUPSAW chairperson at Chris Hani Baragwanath Academic Hospital, said this is not the first time the group has delivered a memorandum demanding that security guards and cleaners at hospitals be directly employed by the department. “We started by engaging the head of the department in 2020, but we have not received a response,” he said.

“As SACSAWU, we have been busy with so many cases of unfair dismissals [by private companies],” said a shop steward.

Protesters were reluctant to give their names. A shop steward from Lillian Ngoyi Community Health Centre in Diepkloof, Soweto, said, “We work in difficult conditions there. There is no shelter for us at the gates so we get rained on and we get cold. We get exploited and we earn peanuts in return.”

A security guard complained that he does not get paid on time and this forces him to borrow money.

The unions want the department to stop all advertising for security and cleaning posts until insourcing is finalised.

They also want cleaners working at the province’s nursing colleges and forensic pathology services to be insourced.

They called for the establishment of a security task team, that includes security guards, to ensure that insourcing is properly and fairly implemented.

They also want all security guards dismissed at Edenvale Hospital and Sizwe Tropical Diseases Hospital to be reinstated immediately.

“Last year at Edenvale Hospital, the security company decided not to pay us for three months starting in September. The company then disappeared and all of us were laid off. Now a new company has been brought in and new security guards are working there. We want to be reinstated and we want to be insourced,” said a security guard.

Julius Maputla, a deputy director in the Gauteng health department, accepted the memorandum on behalf of Gauteng Health MEC Nomathemba Mokgethi. When asked to address the crowd he said he could not comment on the demands made by workers because it was outside his jurisdiction.

The unions gave the department seven days to respond to their demands, failing which they intend to organise stay-aways and shutdowns.

Kwara Kekana, spokesperson for the Health MEC, said the department is “currently doing an assessment in order to try and look at the model that can be employed regarding security”.

“The Private Security Industry Regulatory Authority and Department of Labour are the relevant authorities for security officers in case of non-compliance by the service provider in that regard,” said Kekana.