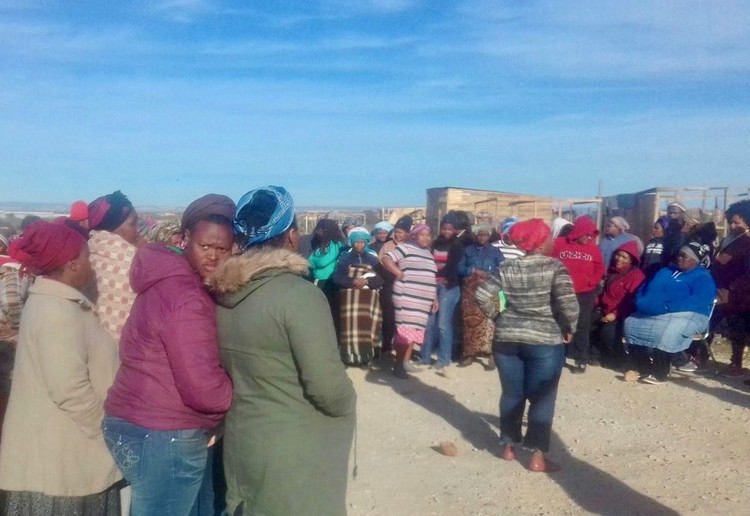 Violent protests have continued in Motherwell following mass evictions that began two weeks ago and restarted on Monday. Hundreds of shacks were demolished in NU29 and NU30 sections this week.

The Nelson Mandela Bay Municipality recently obtained a court order instructing the office of the sheriff to carry out the evictions.

After shacks were demolished in Ikamvelihle, municipal and other vehicles were attacked and torched.

On Monday, police conducted an early morning raid at 3am and arrested 12 residents of Ehlovini settlement in Wells Estate on charges of public violence. According to the police 30 tyres, 18 petrol bombs and a five litre can of petrol were confiscated.

Protesters are demanding houses. Thokozile Soporo, whose shack was demolished in Ikamvelihle, said she has been on the housing list since 2007.

“I don’t like to live the life of a squatter. It is inhuman and very humiliating, because the place does not have toilets, water or electricity. I know of many people who applied for a house after me, but they are already living in their houses,” she said.

“The municipality should tell us the truth. We know that some of the house beneficiaries do not qualify to have houses because they are not poor people but work for government. I will wait for the police to leave this place, then I will have to rebuild again. I have lost nearly R5,000 worth of furniture and building material that the police took away from my shack,” said Soporo.

NU 29 resident Mehlo Jamu, whose shack was also demolished, said, “We fought and defeated apartheid because the government was very arrogant and treated its people like animals. What this administration is doing to its residents is not different to the apartheid administration. I have lost lots of household goods as a result of this barbaric action. I will rebuild and fight for this place. This is my home.”

Nolukho Toyo said she was deep asleep when the police kicked her door in [during the 3am raid on Monday]. “I was sleeping with my 10-year-old son,” she said. “They also fired rubber bullets while we were in the shack. In other shacks, the police pointed their guns to children and old women. I am unemployed so I cannot get the money to pay rent. I will only leave this place after the municipality has given us a better place.”

Mayor Athol Trollip said, “It is a problem when people protest about housing delivery and then turn around and stone vehicles and burn down municipal infrastructure. Nobody in South Africa has the right to assault innocent people. That’s criminal, yet people want to be treated with kids gloves.”

“We have a plan where we are going to build those houses. We cannot do that if land earmarked for this has been invaded. This is a major problem in our city. We also have many instances where people invaded houses whose owners are not there. We need to identify the land and build the infrastructure to service them. We are planning to provide 12,000 houses with title deeds over the next three years.”

Trollip said the evictions had been done with due legal process. “Evictions are carried out by the office of the sheriff with the assistance of the police. If household property is removed, it must be labelled and taken to a place where the owners can claim it back.”

Police spokesman Captain Andre Beetge said the “evictions being executed by the Sheriff of the Court in Motherwell, Ikamvelihle and Wells Estate areas have sparked violence and damages towards innocent motorists”.

Beetge warned motorists to avoid the N2 road between Bluewater Bay and the R335 off-ramp as well as the Addo road passing through Wells Estate.

He said the operation will continue until Friday.