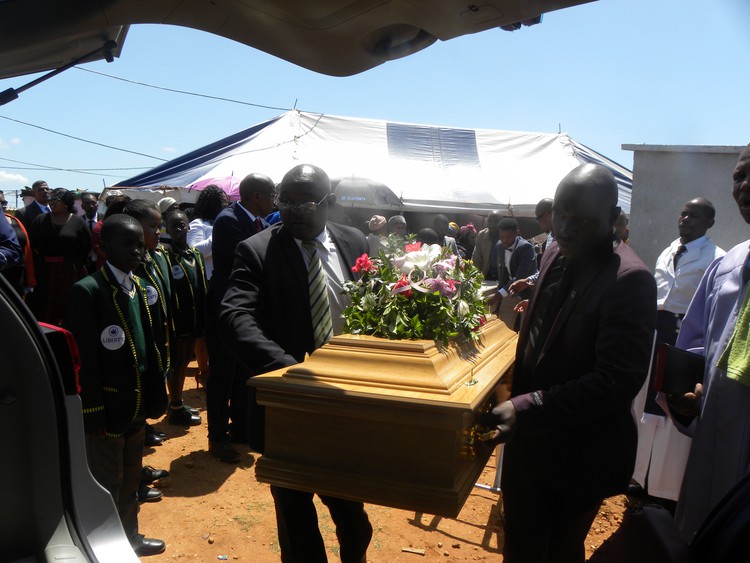 The coffins of 11-year-old Asive and her five-year-old brother Alizwa Rhwayibana being carried into the KwaNoxolo cemetery where they were buried on Sunday. Photo: Joseph Chirume

“The death of these children highlights government’s failure to deliver quality services to its citizens,” said primary school teacher Nomsa Faku. She was speaking at the funeral of five-year-old Alizwa Rhwayibana and his sister Asive aged 11.

Alizwa and Asive were two of four children who died last week after apparently eating toxic food from a nearby dump site in NU30 in Motherwell. The families say they are considering legal action against the Nelson Mandela Bay Municipality for failing to collect refuse regularly. The funeral of the other two children, Alunamda and Zintle Mqawu, was held on Friday. Another child, Asiphile Grootboom, 7, was briefly admitted to the clinic and discharged.

On Sunday, scores of relatives and community members paid their last respects to Alizwa and Asive who were buried at the KwaNoxolo cemetery.

Faku said the municipality was to blame for not regularly cleaning dump sites. She described Asive as a passionate learner with good leadership skills.

The children’s uncle Siphosethu said that Mayor Thsonono Buyeye and ward 54 councillor Morgan Tshaka had initially promised to assist the family with funeral costs. The family had not heard back from officials and no one from the municipality attended the funeral.

Family spokesperson Ayanda Poni said, “The cause of our children’s death was negligence on the part of the municipality. If the municipality had provided us with refuse bags or if the dumping site had been secured, this would not have happened. We will definitely seek legal advice on the case.”

Elufefeni Primary School Principal, Lumka Ntsumpa, also urged the community not to dispose of expired food in open places. “This is a wake up call to the community and the municipality.”

Calls and messages to councillor Tshaka had not been answered by the time of publication.