Scientists step up demand for government to protect oceans 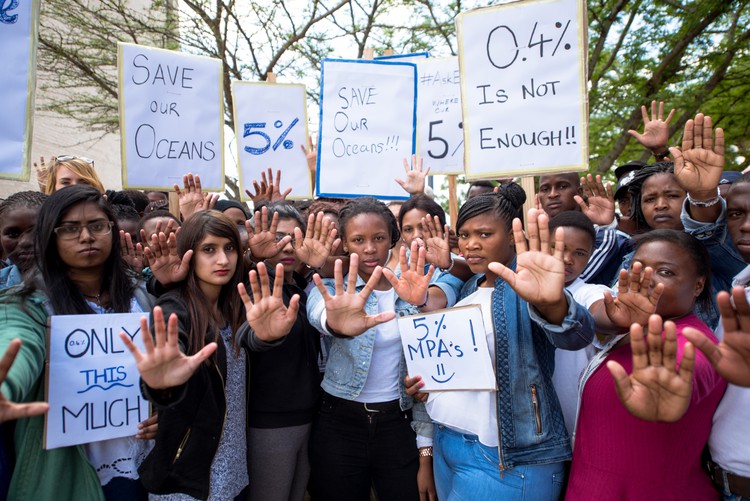 As part of the “Only This Much” campaign, a group of marine science students are mobilising for increased protection of the oceans across all African national waters. Photo: Jordan Milton

A group of young marine scientists are questioning why government is stalling on declaring a network of Marine Protection Areas (MPAs).

Youth for MPAs recently sent a letter to the Department of Environmental Affairs (DEA) asking why an expanded network of MPAs had not yet been created in line with international commitments. The government has pledged to increase the network of MPAs to at least 10% of South African ocean by 2020, but currently only 0.4 % is protected.

Up until now, South Africa’s minister of Environmental Affairs, Edna Molewa has refused to answer accusations that her department has become subservient to the petroleum industry which has been granted gas and oil exploration leases covering more than 90% of SA’s exclusive economic zone.

Although Molewa published draft notices in February 2016 to declare 21 new MPAs, increasing protection to 5%, nothing has arisen from the comprehensive public participation process which ended on 3 May 2016.

Towards the end of last year, DEA spokesperson, Albi Modise, said Molewa was expected to make a pronouncement soon. A year has since passed and people are still in the dark, including leading marine scientists who played critical roles in mapping out the proposed network of extended MPAs.

The DEA has also not answered queries from Youth for MPAs, so the group held an “Only This Much” demonstration in Durban on Monday, holding placards and chanting: “Where’s our 5%?”

According to Saul Roux from the Centre for Environmental Rights, the benefits arising from expanding South Africa’s MPA network are unquestionable.

They would not only protect fragile marine eco-systems that have been identified as critically important biodiversity nodes, but also bolster the rapidly growing marine economy, in particular fishing and tourism, and the jobs and livelihoods that these sectors sustain.

Like others, Roux is questioning why the minister is stalling.

“The question has to be asked whether this is due to offshore oil and gas and mineral interests,” said Roux.

At Monday’s demonstration, Nobuhle Mpanza, a marine biology student at the University of KwaZulu-Natal, asked: “What is the hold-up in implementing the 22 MPAs to get to the 5% that we need now? The 5% was meant to be declared in 2016, which means we are two years behind schedule. If there are any valid reasons for the delay, why hasn’t the Minister informed the public? What strategy has the Minister put in place to reach the 10% by 2020?”

This very question is likely to dominate discussion at this year’s four-day Ocean Stewards Science Session which gets underway at the University of KwaZulu-Natal on Monday. Sponsored by the Blue Fund — a Grindrod Bank and WildTrust marine conservation initiative — the event brings together more than 30 marine biology students and a cohort of leading marine scientists. The focus is on critical issues affecting the oceans, associated career opportunities, and latest developments in marine science.

The keynote address is titled: Why MPAs are an important toolkit for healthy oceans. It will be presented by Professor George Branch, widely recognised for his contributions to marine science, and will likely provide insight into why the country’s oceans need protection.

We put several questions to Zolile Nqayi, Director of the DEA. He did not answer them directly but did say that there are “many stakeholders that have been operating for years” that need to be consulted. “As government departments, we are trying to align objectives of individual activities within Operation Phakisa’s stated aim of protection of the environment and consumptive and exploration activities, for the benefit of all citizens in terms of job creation and wellness of the ocean environment.” (Operation Phakisa is a government development initiative.)

Produced for GroundUp by Roving Reporters.