“Officials promised us heaven and earth” 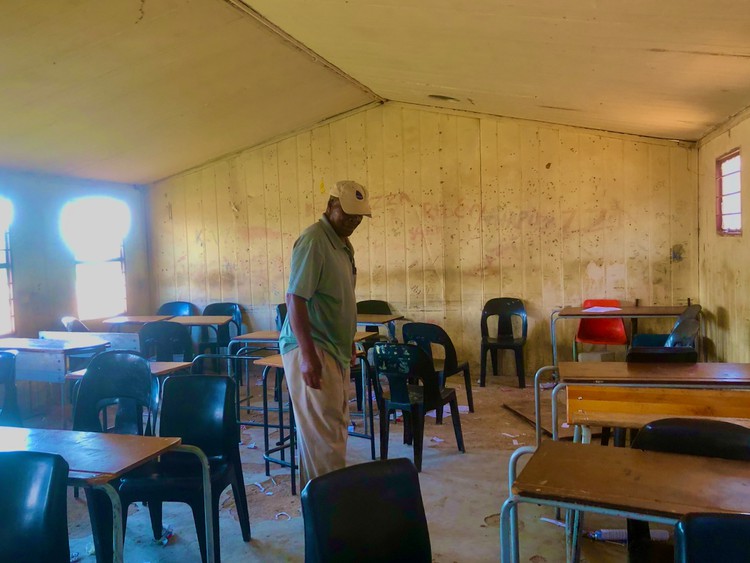 Steven Laka says besides the poor condition of the prefab classes, nearly 70 learners have to share this small classroom. Photo: Mosima Rafapa

Five schools in North West Province are threatening a shutdown from next week if the provincial government fails to build a new school or relieve overcrowding at Machakela-Mamodibo Secondary in Mogogelo Village, Hammanskraal.

Mogogelo Primary, Dikgorwaneng Primary, Boitemogelo Primary and L.M Mokoena Special will shutdown in solidarity with Machakela-Mamodibo from Monday if the provincial government does not provide a date when construction of a new high school will start.

The decision was taken during a community meeting held on Thursday at Machakela-Mamodibo. It was attended by the School Governing Body (SGB) members of all five schools.

The school’s infrastructure is poor. It has dilapidated prefab classrooms and still has a bucket system toilet. There are holes in the floor, broken blackboards and few chairs and tables. Learners sometimes sit on top of bricks. Last year, the school had 986 learners. This year 1,056 have enrolled at an already too-full institution.

Machakela-Mamodibo SGB chairperson Elizabeth Rehlamfu said previous SGB members had fought for a new school. But the department has failed to fulfil its obligation. “Many meetings have been held where officials promised to start with the project of building a new school but nothing has happened,” said Rehlamfu.

Residents have signed a petition and sent it to various government institutions.

Rehlamfu said that in 2013 Mamodibo Secondary merged with Machakela Middle to form a high school to accommodate grades 8 to 12.

A new school is expected to be built on vacant land, where the former Mamodibo school used to be situated.

Resident and former SGB member Steven Laka said meetings were held with officials as far back as 2003 and 2005 “where they [North West Department of Education] promised us heaven and earth”.

In April 2019 parents protested for two weeks over the state of the prefab classes.

On Monday, department spokesperson Elias Malindi told GroundUp that he will be in contact with the SGB members. Public Works expects tenders for the project to be advertised by the end of February, Malindi said, and the contractor to be appointed in April.

He said the planning for the school started in 2015 but budget constraints delayed progress until 2018. “It was then decided to change the scope to a new school instead of upgrading and additions. This required a new design and feasibility study that started in 2019.”