School students come out in support of teacher accused of beating 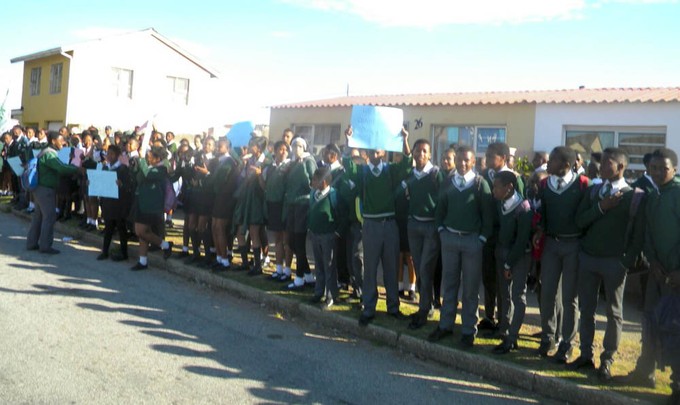 Students and teachers from Paterson High School in Port Elizabeth protested today in support of a teacher who is accused of beating a grade 10 student.

Classes at the Shauderville school started late today after students and teachers held an early morning protest outside the school against their School Governing Body (SGB) which they said was taking sides with two parents who complained about a teacher.

The parents are members of the SGB.

The students and teachers chanted “SGB Must Fall” holding placards with the words “Hands off our Educators” and “Unity is Power, Division is a Weakness”.

The teacher is accused of beating a student in a classroom following an incident on the rugby field. A student is said to have filmed the beating on a cellphone.

Two parents who are members of the SGB reported this to the body and to the department of education. According to SGB chairman, Wayne Fortuin, “sanctions” were taken against the teacher.

One teacher who did not want to be named said the video was not clear and the SGB and department of education had not investigated the accusations thoroughly.

Grade 12 pupil Luphawo Seti said the teacher accused of the beating was one of the best in the school.

Fortuin said he had received a petition from parents and teachers and had explained to the two members of the SGB that their action had been “irresponsible” and that teachers felt they should not come to the SGB meetings anymore.

Eastern Cape department of education spokesperson Loyiso Pulumani said the matter would be referred to district managers who would visit the school.

School principal Sivan Pillay did not want to talk to the media. Neither the accused teacher nor the two parents could be reached for comment.