Shortage of teachers, textbooks and classrooms in Jeffreys Bay school 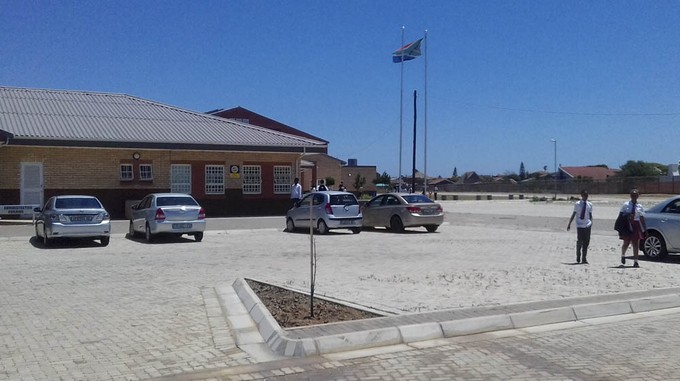 Jeffreys Bay High School has started the year with a shortage of teachers, textbooks and classrooms. Photo: Joseph Chirume

Hope for a better year in 2017 is fading for teachers and learners at Jeffreys Bay High School, which started the year with a shortage of teachers, textbooks and classrooms, after the Eastern Cape Department of Education failed to keep promises made last year.

Some parents are threatening to pull out their children and look for better schools..

The school, in the seaside resort town of Jeffreys Bay, 80 km from Port Elizabeth, was opened in 2015 with 472 learners, mainly from poor families. Last year the number rose to 702 learners, taught by 19 teachers, according to acting principal Eric Jonklaas.

This year the number has swelled to 972. The grade 11 class, which opened this year, has close to 100 learners. (See Editor’s Note below.)

Jonklaas said the school had “hundreds of learners from the surrounding areas” on the waiting list.

“So far we have accepted 270 new learners.The school is supposed to have 24 teachers, according to last year’s recommendation by the Department of Education. Although we applied for additional teachers to fill the gap, these teachers will only be available at the end of the first term because appointing a teacher normally takes two to three months.”

School Governing Board chairman Philip Jacobs said the contracts of two temporary teachers employed at the end of last year had not been renewed.

“Our challenges are still the same as last year.”

One disgruntled parent whose son is in grade nine said she would move her child if she could. “This is the only secondary school in Jeffreys Bay. When this school opened in 2015, everybody hoped that it would bring better education to our children. What we are now seeing is a circus. If I had enough money for daily transport, I would take my child to either Humansdorp or Hankey where there is better education.” [There is also a private high school in Jeffrey’s Bay.]

A pupil who did not want to give his name said he regretted transferring from Hankey. “At first everybody thought Jeffreys Bay would be a model school. In Hankey we did not have a laboratory or a computer room. We were told these would be built here, but nothing is coming out of this dream. I am now desperate and hopeless.”

Kouga Municipality Executive Mayor Elza van Lingen slammed the Department of Education for failing to solve problems at the school. “Jeffreys Bay High School has been experiencing serious problems from the beginning of the school year in 2016. Among these are lack of teachers, lack of textbooks and even a lack of financing that resulted in there being no toilet paper to welcome learners and teachers at the beginning of the 2016 school year. Despite our engagement with the Department of Education and promises that extra classrooms would be built, textbooks would be delivered and funding would be provided to pay the administration staff, nothing has happened.”

“The school will run out of classroom space this year and there aren’t enough teachers to cater for all the current learners. We will once again engage the Department of Education — who unsurprisingly are not visiting the Jeffreys Bay High School on their oversight visit to Kouga — as we will not accept learners being left behind in any of our schools in Kouga.”

Eastern Cape Department of Education spokesperson Loyiso Pulumani said: “The department is currently procuring 400 emergency classrooms to be made available to schools with urgent need of additional classes. Textbooks are currently being delivered and should be at the school before end of the month.”

He did not respond to questions about teacher shortages.

Editor’s Note: How many learners per teacher?

As of 2014, according to the Department of Basic Education:

By contrast, if 972 students do go to Jeffreys Bay High School this year, it will have a learner to teacher ratio in the first term of 51.

In an answer to Parliament in September 2012, Minister of Basic Education Angie Motshekga implied that government was committed to a learner to teacher ratio of 30 to 1. On the face of it this has been achieved.

But the distribution of teachers is very unequal. So for example, BusinessTech reported in August that Curro Holdings, the largest private school operator, has a ratio of 15 learners per teacher in its schools. UPDATE 17/1/2017, 19:45: On its website Curro lists teacher to learner ratios for some of its school models as 25 to 35 to 1.