Khayelitsha Schools benefit from having own food gardens 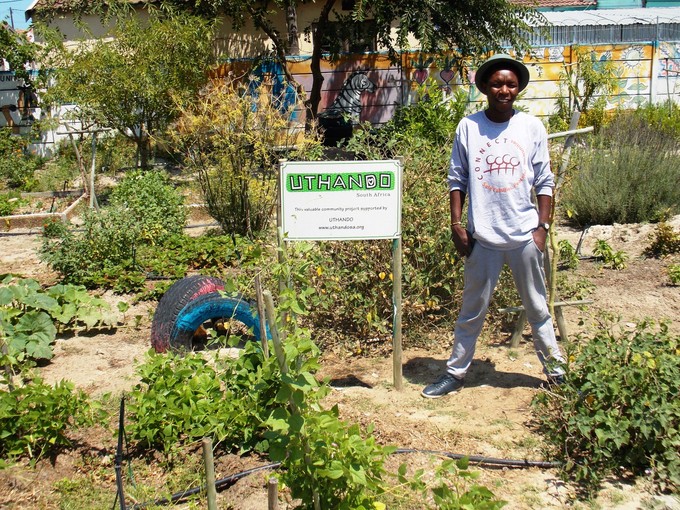 As the country is caught in a drought and food prices increase, Khayelitsha schools are harvesting the benefits of having their own food gardens.

Xolisa Bangani, founder of the Ikhaya Food Garden at Isikhokele Primary School in Site C, says the garden helps students from poor households to have something to eat at school. He said the project has inspired over 50 people in Site C to start their own food gardens, and another school in the area had also started a food garden.

“We share the food with the school and we also give food to the learners that are working at the garden as a token of appreciation. And they are also able to put food on the table at home.”

He says the garden teaches urban youth the importance of a green environment and has ignited a passion for farming among some students as well as in the wider community.

The garden was started in 2013. It was recognised as one of ten thousand slow food gardens in Africa by Slow Food International based in Italy. The school exhibited their produce at the World Design Capital when it was in Cape Town in 2014.

Bangani says there are challenges. He wished the garden had support from the City of Cape Town. It is currently supported by a private company called Uthando Tourism.

Bangani said they grow eggplant, spinach, beetroot, pumpkin, green beans and they also have fruit trees. He says the garden is small, but they utilize the space effectively.

Luleka Primary School principal Gcobani Mthoba says the budget for their school feeding scheme is severely strained by rising food prices. The garden also creates some employment for the community.

“We divide the food between the parents that are working in the garden … The surplus is sold to generate an income for the people working in the garden. We are only planting vegetables. The only challenge we have is water and we wish that the City of Cape Town would pay the water … We are grateful that the Department of Education is assisting us,” he says.

“The number of absentees has dropped significantly, because students know they will eat at school.”

But deputy principal of Kwamfundo High School, Nompumelelo Zwane, praised the City for supporting their school garden with equipment and labour when it was started in 2011. Zwane says the garden has played a critical role countering poverty at the school and it has also helped the school save money.

“We have 32 orphans and we frequently give them food from the garden. The number of absentees has dropped significantly, because students know that they are going to eat at school,” she says.

According to Zwane, the garden also benefited the community, providing employment for the residents of Harare. They plant potatoes, tomatoes, cabbages, onions and spinach. They buy seed from community garden organisation Abalimi Bezekhaya, which also advises the school.

“At the moment, the space we have is small, but we hope to create another space within the school as we have seen the benefits of the garden,” she says.

Councillor Suzette Little, Mayoral Committee Member for Social and Early Childhood Development, said the City’s Poverty Alleviation and Reduction Programme identifies existing food gardens with the assistance of ward councillors and then provides support, including training and resources ranging from garden tools to compost and seedlings, as well as labour funded via the Expanded Public Works Programme.

Little says there are challenges, including a lack of space for establishing gardens at some of the early childhood development centres.

The City intends to establish a “working group” to further the programme.