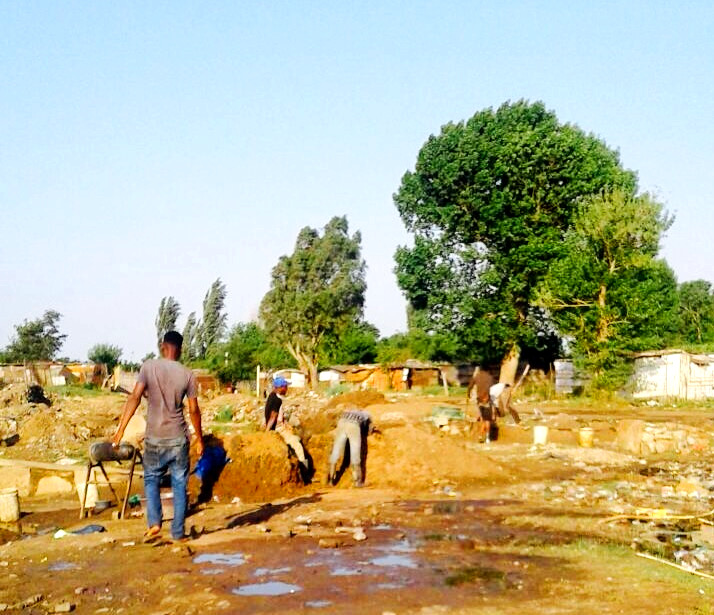 At 8am, 13-year-old Moses (not his real name) loads soil into a phenduka, a gold refining machine. He mixes the soil with salt, washing powder, vinegar and water. He throws heavy metal balls, the size of tennis balls, into the rusty, cylindrical metal machine, and closes it with a tight rubber lid.

He begins to spin a handle vigorously with his right hand for a while to get the perfect output from his phenduka. The work continues for ten minutes, before he switches hands. The process takes about 40 minutes.

Moses abandoned primary school to begin his shift on the phenduka machine on the illegal mining fields of Van Ryn in Benoni. Next to him are other young boys who appear to be about his age, equally muscular from days of spinning the amaphenduka. Phenduka in Zulu means “changing”, suggesting how the soil particles are transformed into gold and the youngsters hope for a “quick buck”.

Police carry out raids to confiscate the phendukas and arrest illegal gold miners. Parents want their children back in school, rather than working as gold miners.

The runaway youngsters retire here after a day’s work for food and rest. Fires are lit at night where tales are told of daily activities. Older men offload the unprocessed soil at the site during the day.

“They [the men the boys work for] always pay us after our gold has been burnt [smelted] and weighed. With Christmas around the corner I know I’m all set. Where else can a 13-year-old boy like myself get such easy money?” asks Moses.

“School will have to wait. Even my mother complains. But I’m not bothering her for money these days; neither am I stealing from anyone,” he says.

Meanwhile at home in Everest informal settlement in Springs on the East Rand, parents complain and worry about their missing children. Everest is an old compound where illegal gold miners have relocated, running away from police. In the early hours of the morning and in the evenings, vans transport phenduka labourers, including school children to Van Ryn.

At a meeting of parents, concern was voiced about the ‘gwejas’, who were said to lure their under aged children to work on phendukas. Some called for them to be arrested. Some even threatened to burn the culprits if they did not stop using school children. Incidents of vigilante burnings have been reported in the area. Parents at the meeting complained that children get money to buy nyaope (a drug).

“All we want is for our children to come home and go back to school,” said one parent.

But a miner in Everest says the young boys came to them begging for work. “They claim that they need the job in order to help their parents at home because there is no food. We do not force them to work,” he said.

According to the law, children aged 15 to 18 may not be employed to do work inappropriate for their age or do work that places them at risk. The National Child Labour Programme of Action formulated in 2003 forbids any form of child labour and child trafficking in South Africa.