School burnt as frustration with education department boils over

“Violence is the only language government understands” - Grade 12 student 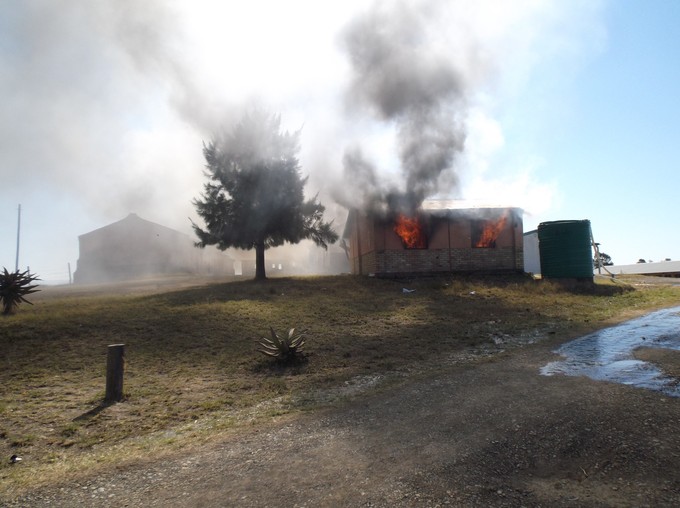 Students in Libode near Port St Johns burnt down classrooms and two storerooms, and removed taps from water tanks at Mhlanganisweni Technical & Commercial High School yesterday. They were protesting against the Eastern Cape Department of Education.

Students said that the school principal, Thanduxolo Mntwini, promised to give answers to their grievances but when he did not arrive at the meeting students went on a rampage destroying the school.

Mntwini told GroundUp he was too emotional to comment about the protest.

A grade 12 student who asked not to be named said that violence is the only language government understands. She said that last week the principal told them that he was working on finding teachers. “On Wednesday he did not come to school. He promised to have a meeting with us today [Thursday] and we waited for him. Still he was nowhere to be found. Even teachers didn’t know if he was coming or not,” she said.

“When our matric results become low we become the talk of the province but the [department] is failing to fix the problem. … Exams are around the corner. How are we going to pass if we do not have teachers,” she said.

Another student said that for years there’s been a lack of teachers at their school. He said the department does not care about schools in rural areas.

“This is the school that was built by our parents years ago. The condition outside looked promising but inside all the ceilings were broken. You could see the sky while you were sitting inside. Each year we kept on patching broken roofs. Maybe now that students burnt it, the department will assist us with a better school,” he said.

Parent Zoleka Mjame said that what she witnessed on Thursday was very sad. Mjame said she was one of the parents who built the school.

“We tried to stop them but there were parents who were chanting for the action, encouraging learners to continue,” said Mjame, “We do understand the pain they are going through and as parents we also aware of the issue of lack of teachers. We were hoping that the principal was going to give a solution but he did not attend. Now we are facing another problem of not having a school,” she said.

Students said three learners were arrested after they were caught stealing groceries. But Port St Johns police spokesperson Mduduzi Godlwana said a case of arson has been opened but no arrest has been made.

“We are monitoring the situation,” he said.

The department’s spokesperson, Malibongwe Mtima, said, “I cannot confirm the reasons behind the protest but we sent an official to the school. As soon as she comes back with the report I will be able to give more information.”

Police said students have not gone to school today.