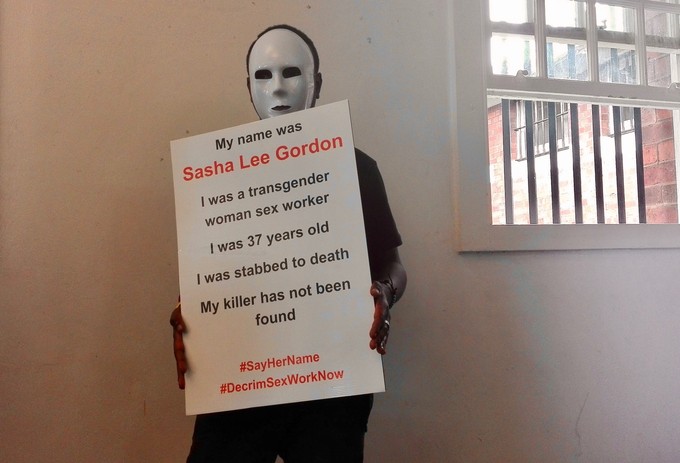 #SayHerName campaign launched at Constitution Hill, Johannesburg, will build a database of all sex workers murdered in South Africa between now and 2019. Photo: Ray Mwareya

On Wednesday, the #SayHerName campaign was launched at Constitution Hill, Johannesburg. It intends to build a database of all sex workers murdered in South Africa between now and 2019 to put pressure on the police and the courts to treat the murders of sex workers seriously.

“‘Prostitute body found with head missing’ – these are the typical degrading headlines in South Africa’s media,” said Katlego Rasebitse, Head of Advocacy at Sex Workers Advocacy Taskforce (SWEAT), the convener of the campaign.

“Say out her name! Murdered sex workers are sisters, mothers, and daughters. They have names, dear media!” said Rasebitse in opening remarks.

Sex workers and delegates from Mothers for The Future, Women Legal Resources Centre, Sisonke and Aids Legal Network ululated, danced and sung, What would Mandela say?

Ishtar Lakhani, the Human Rights Defence Manager for SWEAT, said: “We have shocking incidents where police bring condoms into courtrooms to use as evidence in sex workers’ arrests.”

Ishtar said sex workers would be trained in their legal rights. “We’ll begin with hotspots in Johannesburg and spread to the rest of South Africa.”

Criminalising sex work, she said, had pushed it into the underworld.