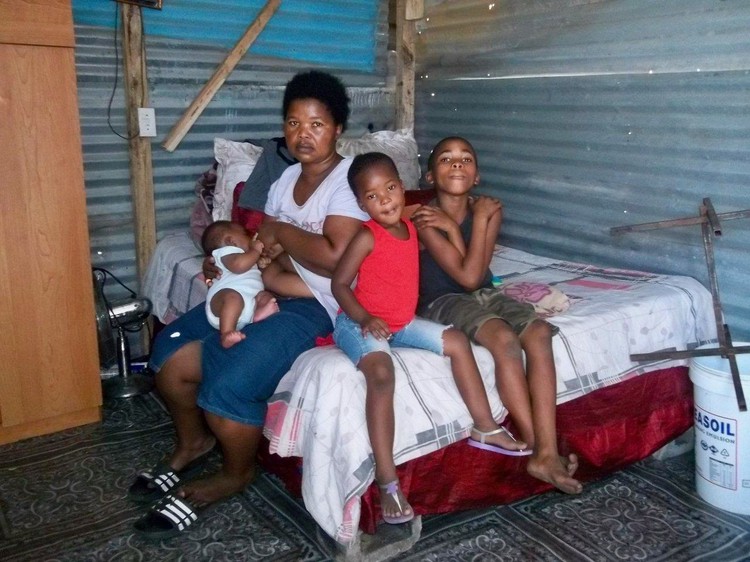 “Even if SASSA gives me only blankets, I would appreciate the gift,” says Khungeka Notshokovu, whose shack was destroyed in a fire in February. The Chungwoon Mission pastor has helped her with second-hand clothes for her children. Photo: Vincent Lali

Residents who lost everything in a fire that destroyed 12 homes in Wallacedene, Kraaifontein, on 18 February are still waiting for SASSA (South African Social Security Agency) to give them disaster relief.

GroundUp reported on SASSA’s lack of action in April and the struggle the families are facing to recover from the fire.

Previously, the City used to provide humanitarian aid including blankets and food to fire victims. This changed in 2018 to SASSA. Since then there have been complaints about SASSA’s unresponsiveness.

“Residents have been waiting for disaster relief [from SASSA] since February,” said community leader Thobani Mathole.

Khungeka Notshokovu, who lives in a shack with her husband and four children aged 10, eight, four and two months, said, “On Wednesday last week I sacrificed my youngest child’s grant and used it to buy plyboard to cover the wall and make my shack a bit warmer … We don’t have enough blankets to keep us warm. We still don’t have enough food.”

Richard Bosman, executive director for safety and security for the City of Cape Town, said that when the City is notified of a disaster it sends a disaster management official to the scene to undertake a risk assessment. The information, including the number of people affected and the social relief required, is given to the City’s Disaster Operations Centre (DOC), which in turn notifies SASSA of the incident via email.

“SASSA was officially informed of the incident by the City on 20 February 2018 at 15:11, by attaching an electronic copy of a Disaster Risk Management Incident Report on Service Request 4632,” said Bosman.

In March Cape Town Mayoral Committee Member for Safety and Security and Social Services Alderman JP Smith said the City would “work closely with SASSA to ensure that notifications are received and responded to as soon as possible. However, where, in the past, social relief was typically activated within hours after a local disaster was reported, it remains to be seen how this change will affect timelines in future.”

In early August SASSA spokesperson Shivani Wahab told GroundUp, “SASSA can confirm that we are investigating the matter and we are awaiting confirmation from the City of Cape Town to confirm their correspondence to SASSA for the request to activate the services.”