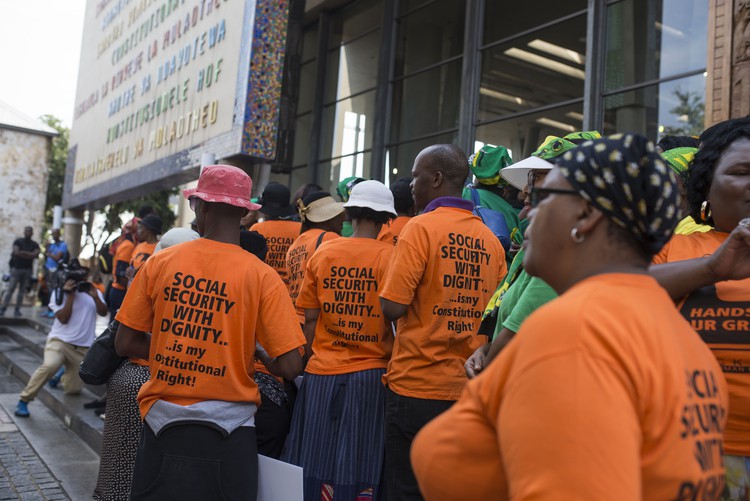 Director-general of Social Development Zane Dangor says he warned in October last year that it might be “immoral” to extend the social grants payment contract with Cash Paymaster Services (CPS) because of concerns about deductions from social grants.

But Minister of Social Development Bathabile Dlamini did not heed his warning.

Dangor, who resigned as director-general on 3 March,  filed an affidavit to the Constitutional Court on Monday, backing the stand taken by former South African Social Security Agency (SASSA) head Thokozani Magwaza against Dlamini. Asked by the Court to explain her role in the SASSA crisis, Dlamini had filed an affidavit blaming SASSA officials for the agency’s failure to take over the payment system after the contract with CPS expired on 31 March 2017. Magwaza responded with his own affidavit denying the Minister’s statements.

Dangor said Dlamini had chaired a meeting on 5 October last year, at which the “work-stream” leaders appointed by her to prepare the takeover by SASSA of the payment system had presented a progress report. “The presentation indicated that very little work was done. The most significant element of their proposal was the recommendation that CPS be given a new contract for a period of two years,” he said.

In its own documents to the Court, CPS also argued for a new two year contract, in which it would charge SASSA R4.6 billion over two years.

Dangor said he had warned at the October meeting that it might appear “that there was an element of self-created delay so as to ensure that CPS continues to pay social grants.”

“In fact, I had the distinct impression that there was indeed an element of self-created delay,” he said.

He said he had raised two concerns: that there might be legal challenges to a new contract with CPS and this might delay the payment of grants; and that a new contract might be “a political mine-field and immoral” in the context of “emerging evidence that CPS was involved in immoral and/or illegal deductions from the accounts of grant recipients”.

Dangor was one of two chairs of the Ministerial Task Team appointed by Dlamini in 2014 to deal with what he called “the unsavoury practice” of deductions from social grants made by companies in the Net1 group, of which CPS is a part. The other chair of the team is Lynette Maart of the Black Sash, which is running a “Hands off our Grants” campaign to prevent these deductions.

CPS has been accused of sharing confidential information about grant beneficiaries with other companies in the Net1 group, including insurer Smartlife and money lender Moneyline. Net1 CEO Serge Belamant has denied this.

Dangor said at a further meeting on 22 October there was still no firm plan for the takeover of the payment system “and again, I was concerned that there was indeed an element of self-created delay to facilitate an on-going relationship with CPS”.

He said by then it was very clear that because of the “parallel reporting structure” set up by the Minister, in which the work-stream leaders reported directly to her, Magwaza knew very little about their work. Magwaza and the executive of SASSA “were excluded from the key decision-making process,” Dangor said.

Dangor said his concerns about legal challenges and about the “moral and political hazards” of continuing with CPS had prompted him to hold meetings with the Banking Association, Mastercard, the Reserve Bank, and Grindrod Bank (through which the CPS system works), with a view to using all the banks including the Post Bank, as an alternative to CPS.

“These recommendations found no traction within the work-streams,” he said.

Finally, a technical team including officials from the the National Treasury and the Reserve Bank as well as SASSA, set up in January this year to address “the looming crisis”, concluded that the “least risky emergency option” would be to extend the CPS contract for one year and prepare a long term plan involving all the banks and the Post Office, he said.

Dangor said he had filed his affidavit to “shed a brighter light” on assertions that SASSA and Magwaza were to blame for the crisis. He had done so “despite potential repercussions to my personal career and notwithstanding veiled physical violence to my own as well as my family’s security,” he said.

Dangor’s Johannesburg home was broken into on 20 March, but nothing was stolen. He said at the time he saw it as an attempt at intimidation and noted that Magwaza’s home had also been targeted.