Beneficiary claims he was told green card operates the same way as the official SASSA card. 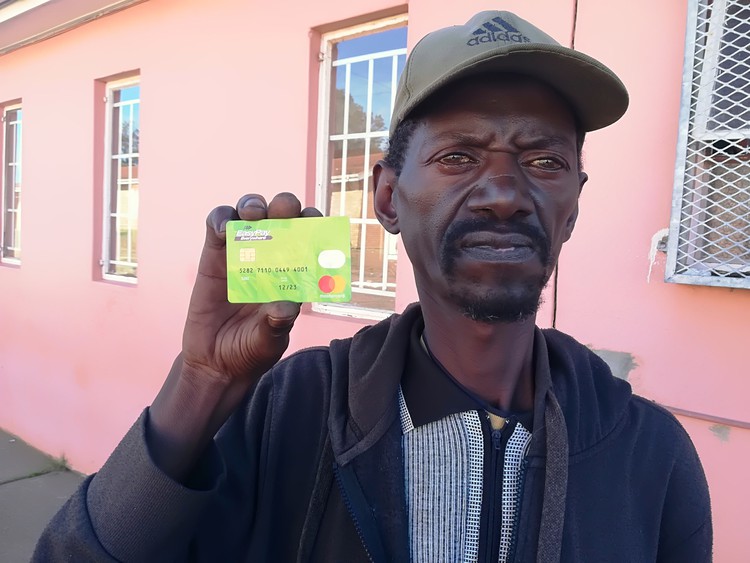 Monwabisi Mjuleni says he was recently redirected from a SASSA office to a Net1 cash loans office where he was given an EasyPay account. He was told the card operated the same way as a SASSA card. Photo: Thamsanqa Mbovane

Monwabisi Mjuleni from KwaNobuhle township in Uitenhage, Eastern Cape was visiting a local South African Social Security Agency (SASSA) when he was duped into getting a green EasyPay Everywhere account.

Net1, which is the parent company of EasyPay Everywhere, has denied the allegation, calling it “baseless” and “without merit”.

An EasyPay account is usually opened for grant beneficiaries who apply for a loan at Net1 financial services. Net1 is also the parent company of CPS, which currently is responsible for paying social grants at cash pay points until September.

Mjuleni receives a monthly disability grant of R1,690. He says he visited the SASSA office in the city centre on 5 June after losing his card. Mjuleni says a “decent man” at the SASSA office approached him and introduced himself as a volunteer assisting beneficiaries.

“He advised me to go to the nearest branch that worked with SASSA, so I can have my new card issued there,” says Mjuleni. “The place is two minutes away from SASSA offices.”

“The man said the card which was green in colour, was no different to SASSA cards and that the cards operated the same way. When I went to the building he then took me to the cash loans premises,” Mjuleni says.

Mjuleni says people waiting in line had also indicated that they too had been sent to the Net1 office to collect new cards. He was then given a green EasyPay Everywhere card.

Mjuleni says he was told his grant would be available on the new card in 72 hours, but it was not. “I went back to SASSA. Ever since then, I have been sent from pillar to post. I have been sleeping with an empty stomach,” he says.

SASSA Eastern Cape spokesperson Luzuko Qina emphasised that there was only one new SASSA card which was issued either by SASSA or the Post Office. “SASSA does not have a green card and [does not offer] any loans,” he said.

Qina said Mjuleni should return to SASSA or the Post Office where his card would be swapped for the new yellow SASSA card. The beneficiary needs to bring along their ID and complete a banking request form for the grant to be paid into the new card or to a commercial bank account of their choice.

Responding to questions from GroundUp, Net1 said it contacted Mjuleni through the company’s call centre. Net1 said Mjuleni told them that he had been referred to the Net1 office “due to the overcrowding at the SASSA office”.

“There was no coercion by any Net1 employee or any agent representing Net1. An account was opened in the name of the beneficiary and he was issued with an EasyPay Everywhere card. He attempted to withdraw the grant from the EPE account, but it was not yet available,” the company said.

Net1 said that Mjuleni informed them that his complaint was not about getting a green card or being coerced by a Net1 employee. “During the call [to Mjuleni] the Net1 Call Centre offered to close the EPE account, the client declined. In light of this investigation there is no reason for any action to be taken against any Net1 employee,” Net1 said.

It comes as the Panel of Experts monitoring SASSAs social grants payment plan on Monday recommended that the agency consider legal action against Cash Paymaster Services (CPS). This after the Panel informed the Constitutional Court that CPS agents were interfering with the process of swapping the old SASSA cards for the new Postbank cards. Net1 has refuted these allegations.