“I was trying to understand my own suffering” says Willie Bester, whose work has been covered up at UCT 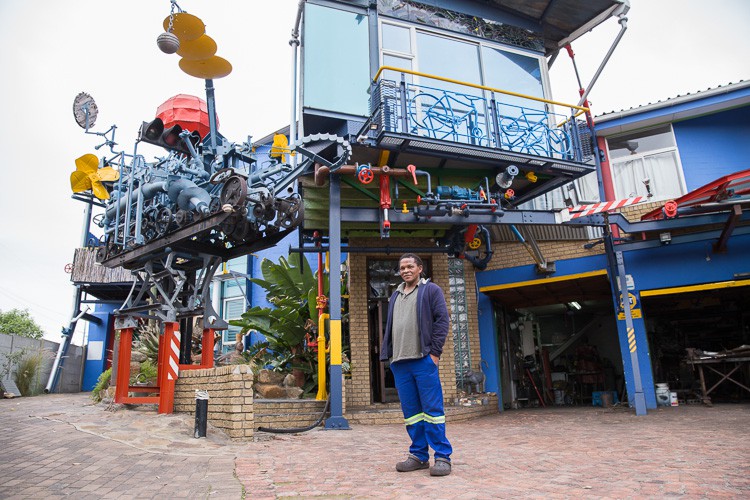 Willie Bester stands in front of his house in Kuilsriver. Photo: Ashraf Hendricks

Artist Willie Bester, whose sculpture of Sarah Baartman in the University of Cape Town (UCT) library has been covered up, speaks to GroundUp.

The renowned artist is soft-spoken and unassuming, and it’s apparent almost right away that he’s most comfortable when at work.

A flying car, metallic propellers suspended from lacquered pipes, and a rusting “BP super 93” petrol pump are only a few of the numerous art installations that greet visitors when they arrive at Willie Bester’s home, though ‘home’ doesn’t do it justice. Bester’s house is a living, breathing work of art. He built the house from scratch after apartheid ended. He is constantly adding to it, adjusting and re-adjusting, re-evaluating and enjoying his home.

Walking into the house, you are met on the right by a water fountain with exposed pipes that extend from the ceiling down to the metallic bowl and tap. On the left is a sitting room. At first glance, it looks like a sitting room one might see in a family home, complete with two over- stuffed couches and a routinely used coffee table. Except that the sides of the coffee table read: “For use by black persons” on one narrow edge and “For use by white persons” on the other.

Bester sits on a shiny, wooden chair. On the wall behind the chair hangs one of his works titled Industrialisation. The rest of the room is similarly filled with pieces he has created or collected from artist friends.

“I don’t accept the word ‘coloured’. It was a convenient label imposed on people from a mixed background,” Bester says. “I feel better when someone refers to me as ‘so-called’ [coloured] because I cannot take responsibility for somebody else’s label.”

Bester’s father was Xhosa and his mother was coloured (so-called). He says his family was put in a category “where you won’t get access to anything coming from the government”.

This aversion to labels seems to have stuck. Throughout his life as an artist, Bester has tried to defy the categories placed on him by apartheid. He says “apartheid came to an end … but I continued to search for some parallels where I could identify with others who suffered. I was trying to understand my own suffering.”

One way he has done this is by finding connections to other people throughout history who have endured pain. This journey led him to Sarah Baartman.

“I heard about the experience of Sarah Baartman and I found some parallels with her story,” he explains. “While listening to a poem written by Diana Ferrus, it already came up to me as a sculpture and then I decided to build [it].” The entire process, from searching for pieces in junkyards to putting the sculpture together, took four months.

According to Bester, he felt an instant connection to Sarah’s story. Born in the Eastern Cape in the late 18th Century, she was taken to England at 25-years-old to be put on display for crowds of curious onlookers who ogled her large breasts and buttocks – a sight so exotic in Europe at the time as to be payed for. After being paraded around England as part of a freak show, Sarah’s proprietors “fled to France with her and they continued in France until her death. And if that was also not enough, they then dissected her body and put it in glass bottles. It seems that this deep-rooted racism went beyond your death. It never stopped. I identified with what she went through,” says Willie.

The Baartman sculpture was purchased by the UCT Works of Art Committee for the new Chancellor Oppenheimer Library in 2001, where it has stood since. It has been covered twice: first in April 2015 by student protesters and again on 9 March 2016 when students covered it as part of their procession to the Center for African Studies Gallery meant to commemorate the anniversary of the Rhodes statue being removed.

Bester found out about last year’s events through an anonymous phone call.

“I didn’t know what the whole thing was about; there were no consultations,” he says. “I was upset because it was not my intention to insult anybody by doing this sculpture. It was something about myself.”

He struggles to understand the actions of students offended by the work. “If they could find a more decent way of expressing themselves … That sculpture has been there for more than 12 years and it has created a lot of debate. A lot of people identify it with suffering. There’s lots of dialogue created through that work.”

Bester is demanding the restoration of his work to its original state. “I want it to be uncovered because it was not meant to be covered up,” he says. To him, concealing Sarah’s body — a body that defies today’s beauty standards — is a step backwards. “You know there is always this thing of what is acceptable. If somebody is too fat or too tall, we tend to hide that person. We don’t want to see [them].”

His work was constructed with the intention of challenging people to look within and recognise their prejudices, he says. “I specifically made that sculpture so that one can confront who we are and that should be acceptable … To cover it up is to do exactly what one had fought against. One had fought for everyone to be acceptable with whatever deficiency they have, or what is seen as a deficiency.”

Having reached adulthood during apartheid, Bester understands the discrimination that comes with looking different, especially in a nation like South Africa. “I grew up where if you’re too dark, you get a job in the kitchen or you have to sit at the back of the buggy because you are not acceptable.” He fights against this notion through his works like Forced Removals (1988) and Untitled (Truck).

One of Bester’s main criticisms of the fallist movements is the lack of knowledge by participants about the historical background and artistic implications of artworks. Bester himself is often misjudged, based solely on his name. “They get caught up with my surname. They think I’m a white man. Sometimes people are shocked when I walk up and they see. And some are very delighted,” he says laughing.

The physical destruction of works, particularly during the February 2016 Shackville protests in which 23 pieces were set alight, is another aspect of the movement that Bester believes to be dangerous. “Some of those works survived the apartheid system… the Boers and the Brits fought the Boer War, but yet they never destroyed a single sculpture,” says Bester, who was an anti-apartheid activist.

“I would have left Rhodes just the way he was because you cannot find a better piece of evidence of who this person was and where he is,” says the artist. “That sculpture is a very healthy pathway for us to know where we come from and where we are going. [Rhodes] cannot hurt me anymore.”

The destruction of busts, sculptures, and paintings worries Bester; society stands to lose the chance to learn from and engage with history if all controversial works are removed or altered. “The thing is they don’t understand that by challenging these things you create a better society,” says Bester. “If you build a sculpture that resists whatever issue there is, it’s a form of expressing yourself as a community. It is tools that are very healthy for a community.”

“I suffered directly under the apartheid system…I should have burned everything because I suffered firsthand, but now it is like my children, who were spared this, who are even angrier than me,” he says. “It is dangerous because we can easily go into civil war. We’ve got enough things that can turn us against one another.”

Bester, like other artists, such as Breyten Breytenbach, is unhappy with UCT’s actions in the face of student pressure. He finds the university’s lack of communication about the veiling of his sculpture frustrating. “I would like them to just consult with me or explain to me what’s going on… what they are doing now is censorship at its worst. That is not in the Constitution.”

The absence of correspondence with artists by the university exacerbates the core issue — the attack on the right of freedom of expression, Bester explains. He thinks that UCT never should have let this happen and students shouldn’t have had direct access to the piece. “The issue is to have a good security system, because it was about security. If it was made out of paper they would have burned it down as well,” he says.

For the students involved, discontent with the Sarah Baartman sculpture extended beyond the piece itself. Baartman, whose remains were ultimately buried in Hankey near her birthplace, still can’t seem to find peace. Bester says that students “even went to her grave and splashed paint on [it]. This thing was countrywide.”

In addition to Bester’s sculpture of Sarah Baartman, students have found issue with 18 other pieces of art. On top of these 19 works deemed to be controversial, UCT removed 75 works from exhibition.

“That was happening during the Hitler regime … they stole the art and they trashed everything.”

When Bester started to search for parallels between the apartheid system and historical systems of oppression, the first connection he made was to the Jewish experience in Nazi Germany. So for him, the events on UCT’s campus and the university’s reaction reminded him of the obliteration of Jewish texts and artworks as well as the seizure of artwork owned or created by Jews. “Now that is very Nazi. That was happening during the Hitler regime … they stole the art and they trashed everything. Now that is a good example of Nazi politics. I cannot describe it differently,” he says.

Instead of removing and covering up challenging pieces of art, Bester says, “we should create forums where we can come and talk about the issues.” In other cases, “if the funds come from government and an artist does something they feel is not in line with certain values, [the government] should make forums and invite the artists to come and discuss the works.”