They claim they are not allowed to speak isiXhosa during break 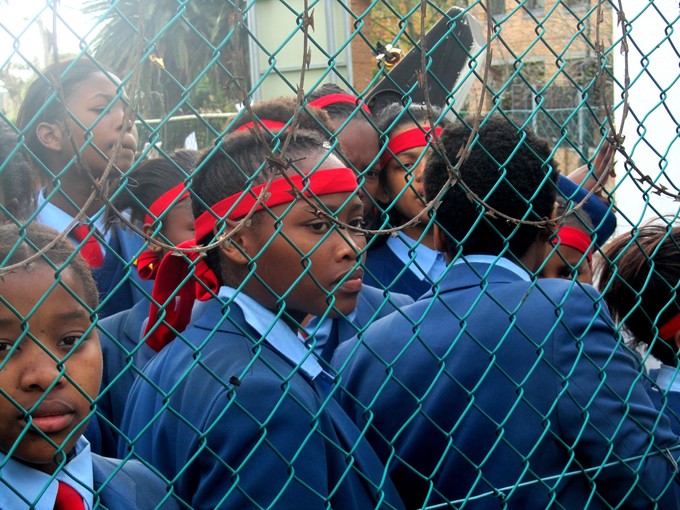 Girls wore their school ties as bandanas during their protest. Photo: Bernard Chiguvare

By Bernard Chiguvare and Diana Mellow

Dozens of learners at Sans Souci High School in Cape Town’s southern suburbs protested in the school grounds today against what a student described as the racist tendencies of the school authorities.

“Four years ago we had a similar protest and the principal promised to speak to the school governing board to change the girls’ hairstyle policy but to our surprise there has been no change,” said Mbaliyethu Gqubela, a 15-year-old grade 9 learner from Langa.

According to learners, at about 7:30 am ten or 11 students were locked outside their classroom for speaking to the media. They were later joined by other students in solidarity.

One grade 11 student learner said the treatment she received at school reminded her of apartheid that she had been told about by her parents. A grade 9 student said school felt like prison because of its policies.

Support from neighbours and another school

A learner said that neighbours around the school had given them food, tea, and coffee. At about lunch time learners from Claremont High School joined the protesting girls but they were not allowed onto the school premises.

“We are in a democratic South Africa. The authorities at this school are racist. At our school as long one keeps hair neat the school does not give us any problems,” said a learner from Claremont High.

The Western Cape Education Department (WCED) in a statement said any allegations of racism and discrimination would be taken very seriously. It is investigating the allegations.

A few parents, mostly women, could be seen waiting at the fence of the school.

“The school authorities have to listen to the children and incorporate diversity into the code of conduct at school,” said one parent speaking on condition of anonymity.

Parents were not allowed to go into the school premises. All gates were closed. They asked the security guard to allow them to speak to the principal but this was refused. Another parent urged the learners to continue protesting peacefully. “Please, your concerns are very valid. Continue doing it peacefully because this is still your school,” she said, speaking to the learners through the fence.

Debbie Schafer, the province’s MEC for Education, said she had discussed the matter with the chair of the School Governing Body (SGB). The SGB had told her her that none of the issues had been raised by the learner representatives with the SGB, and that there was an open door policy where any matter of concern could be discussed.

Over the past few days girls at Pretoria Girls High School have been protesting about similar issues.