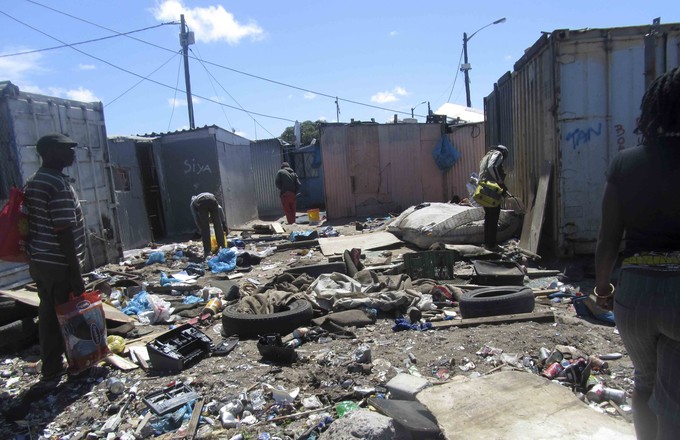 An angry crowd in Samora Machel destroyed a scrap metal business on Monday, accusing the owner of responsibility for a car accident in which three school children were hurt.

The scrap business was run from a shack at the corner of Oliver Tambo and Leonard Streets in Samora Machel.

The children were on their way to Zusukhanyo High School when they had to make a detour into the road because the man’s bakkie was parked on the pavement, according to residents. They were hit by a car and injured.

Nico Mzolisi, ward 33 councillor, who addressed residents yesterday at Weltevreden Clinic, told GroundUp that residents had previously warned the scrap metal dealer not to park in that spot. He said the crowd had descended on the man who had defended himself by throwing stones and had then fled. His shack had been destroyed.

When GroundUp arrived on the scene residents were picking up what was left of his goods.

The scrap metal dealer is Nigerian.

The owner of another shack in the area, Camille Mboyo, from the Democratic Republic of Congo, said his business had also been attacked. He said he sold secondhand shoes, plumbing material and new electrical appliances from a container nearby.

Captain F C Van Wyk from SAPS Western Cape Media Centre said a malicious damage to property case had been opened at Nyanga police station. No arrests had been made.